Adrienne Young's book Sky in the Deep was no doubt one of my all time favorite young adult fantasy stand alone books. Sadly, the book she wrote immediately after that was one of my biggest disappointments. So I really didn't know what to expect of this one. The premise sounded good. The blurb was promising. And in the end, I would say it delivered. It wasn't as amazing as her first book, but it wasn't bad and I am actually looking forward to the next one. 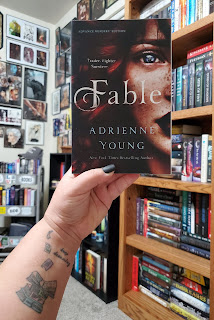 As the daughter of the most powerful trader in the Narrows, the sea is the only home seventeen-year-old Fable has ever known. It’s been four years since the night she watched her mother drown during an unforgiving storm. The next day her father abandoned her on a legendary island filled with thieves and little food. To survive she must keep to herself, learn to trust no one and rely on the unique skills her mother taught her. The only thing that keeps her going is the goal of getting off the island, finding her father and demanding her rightful place beside him and his crew. To do so Fable enlists the help of a young trader named West to get her off the island and across the Narrows to her father.But her father’s rivalries and the dangers of his trading enterprise have only multiplied since she last saw him and Fable soon finds that West isn't who he seems. Together, they will have to survive more than the treacherous storms that haunt the Narrows if they're going to stay alive.

Fable was a lovely character, and although the story strongly focused on her I really liked everyone else. They all got their moment to shine and to add meaning to the story.

Adrienne Young is an amazing writer and the almost lyrical tone to story and its vivid description added much charm to it.

My main reason to not have loved it as much was the pace. The book was a little slow and dragged at certain points. Once Namesake comes out I wonder if I will wish this to have been a stand alone or not.