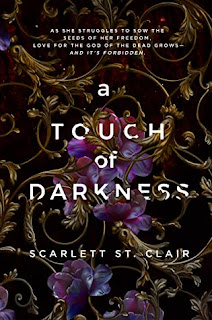 I knew very little going into this book except that it had my current favorite bad boy in it: Hades! Seriously though, I have a "hades tbr" at the moment, it's a thing. And if you know any good Hades based romances do tell me. Always and forever looking for more.

Hades, the God of the Dead was phenomenal. I have ZERO complaints about his character. There was more to the underworld than known by other gods and humans, and the same is true about the man that runs the place. He is to the point and although not always up front and straight forward he is always honest and true. He has built a gambling empire but his bets are not always monetary and they are known for being impossible.

Persephone was very much still learning who she really was. Up until meeting Hades and for some time after she has no power of her own. Plants die at her touch and that is that. She is also known as the goddess of spring, but that is not because of who she is but rather because of who her mother is, the actual Goddess of Spring.

Hades brought Persephone to life. He thought her to think on her own and to see herself as more than just the daughter of the Goddess of Spring. He worshipped her, and by worshiping her gave her the power she has been missing her whole life. The chemistry between them was off the charts. Perfectly written.

All in all this was a great adaptation/retelling of Hades and Persephone. Honestly, I wish the next book focused on other gods rather than being more and these two. I get that the ending was left a little open but it was a good ending. Happy endings don't always have to equal having everything tied in a perfect bow.