He was the most beautiful man alive.
And if I wasn't careful, he was going to be my death.
*A scorchingly hot modern retelling of Psyche and Eros that's as sinful as it is sweet.*
In the ultra-modern city of Olympus, there's always a price to pay. Psyche knew she'd have to face Aphrodite's ire eventually, but she never expected her literal heart to be at stake...or for Aphrodite's gorgeous son to be the one ordered to strike the killing blow.
Eros has no problem shedding blood. But when it comes time to take out his latest target, he can't do it. Confused by his reaction to Psyche, he does the only thing he can think of to keep her safe: he marries her. Psyche vows to make Eros's life a living hell until they find a way out of this mess. But as lines blur and loyalties shift, she realizes he might take her heart after all...and she's not sure she can survive the loss. 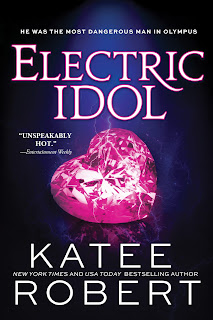 Electric Idol is Katee's modern take on Eros and Psyche and my first ever retelling of these two. As most of you know I like my god of the dead and all the things dark, so I've read my fair share of Hades retellings, but never one of Eros, aka- Greek god of love and sex. You will know him from his Roman counterpart: Cupid (desire). I liked drawing cupids as a teen, so I knew of Cupid and Eros, but I knew close to nothing about Psyche. After finishing the book (because I didn't want to be influenced by the Greek mythology stories) I went and read about her. Goddess of the soul! It works perfectly. Katee's Psyche is a plus size influencer with a heart of gold that you can't help but love. Definitely a modern day Psyche personified!

Eros and Psyche story was sweet. I really can't find a better way to describe it. I am so used to Katee's more racy books that this one caught me off guard. Eros is a cinnamon roll. The kind of character that didn't have the best upbringing and all you want to do is hold and "pet". Apparently he is also a murderer, but who cares... that minor detail was easily forgotten :)

And Psyche is this beautiful amazing soul inside and out. Someone you want as a friend for life. The two of them together were perfection. The mutual attraction (hot hot hot) and Psyche's way to see past his walls and give him the care and love he never got before made it for a really enchanting read.

The political maneuvers, power plays, and many side characters gave the story the background needed to make it not just a great romance but also a world you can lose yourself in. Apparently book three is on Helen, so I am guessing Helen, Paris and Menelaus? That ought to be interesting! I may or may not be dying of curiosity already. Though what I really can't wait for is to find out how the story of the new Zeus and Calypso unfolds. I did not see that coming. I've always loved Greek mythology, but it is not easy to find good retellings on characters other than Hades and Persephone, so this is exciting. Go Katee :)

Did I like it as much as Neon Gods? nope. But that is 100% a matter of preference in character traits and nothing to do with the writing or quality of the book. I like my characters with a little more edge and Eros was so darn huggable I genuinely forgot he was also meant to be a killer for most of the book.