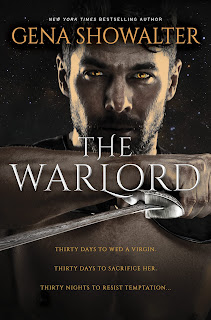 I discovered Gena Showalter long after her Lords of the Underworld series had started. I have those
books, but I haven't read them all. I have however read many of her other smaller series. My favorite still the one that introduced me to her books in 2018, Shadow and Ice (Gods of War).

The Warlord is the start of a new series, but if you have read Lords of the Underworld some bits will connect. It is not necessary you read them though, gods know I have not. They sit on my middle shelf and I stare at them daily, does that count? hehe

For centuries, Taliyah Skyhawk has prepared to become Harpy General, leader of the deadliest female army in existence. One of the requirements? Remain a virgin. But, for a chance to save her people, she must wed the fearless leader of the Astra Planeta, Alaroc Phaethon.The time has come for Roc to sacrifice another virgin bride to his god. There has never been a woman alluring enough to tempt him from his path. No warrioress powerful enough to overcome his incredible strength. No enchantress desirable enough to make him burn beyond reason. Until now.With the clock ticking, war between husband and wife ignites. Except Taliyah never expected the merciless king to challenge the future she once envisioned. She certainly never anticipated the thrill of their battles turning into games... The problem is, only one spouse can survive.Love is a battlefield in Showalter's The Warlord.

This book had a lot of humor. The two main characters are the best warriors in their own worlds and neither is about to admit defeat. The harpies are a bunch of bad ass ladies with a lot of attitude. Taliyah didn't back down to anything and anyone, ever. Roc, the leader of the Astra warriors was magnificent. He is moody, broody, and grumpy. As opposed to Taliyah who is full of sass, attitude for days, and bossy as hell. They made one formidable couple. The hate to love and the undeniable lust/passion between them set fire to the pages.

She needs to kill him to survive. He needs to kill her to avoid a curse on him and his men. Falling in love was not part of the plan. But then, most good things aren't! Roc and Taliyah were evenly matched and will take you on a ride for the ages! If you are a paranormal fan, this is a must!