Hello Hello friends! Who is ready for another Stay a Spell book? 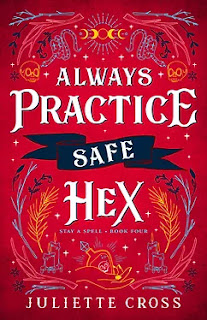 Livvy Savoie is a people person. Not only does she have the magical gift of persuasion, but her natural charisma charms everyone she meets. She hasn’t met a person she didn’t like. Until her annoyingly brilliant competitor walks through the door. No matter how hard she denies it, loathing isn’t the only emotion she feels for him.

Grim reaper Gareth Blackwater is rarely, if ever, moved beyond his broody, stoic state. But the witch he’s partnered with in the public relations contest is destroying his peace of mind. He’s convinced that the flesh-melting attraction he feels for her is merely her witchy magic at work.

But forced proximity proves there is more than magic sparking between them. Livvy learns this enigmatic grim’s abilities are beyond any supernatural she has ever known. And when Livvy becomes the obsessive target of a dangerous warlock, Gareth proves just how powerful he truly is. Because no one is going to hurt his Lavinia.

Livvy was absolutely adorable. She has plenty of charisma and charm and you can help but want someone like that as a friend. I love her 'get it done' attitude and the way her brain works.

The chemistry between the main characters was obvious from the very first chapter. They were perfect for each other.

I do have to say this was my least favorite of the four books. Some of it is because the book is a little slower and the main subplot doesn't really have a supporting background until the end... but mostly, it isn't my favorite for personal reasons. The saying "opposites attract' exists for a reason. We aren't usually attracted to people that remind us of ourselves. So me being straight, if the main heroine reminded me of me that wouldn't be a problem, but when it is the guy... Sadly Gareth fell flat for me. His background, which runs throughout the book just left me rolling my eyes. Not because its bad or badly written but because (once you remove the supernatural elements) I have heard a million times before in real life (being a foster mom) and have experience myself as a child. It is just meh...You will probably like it because it makes you relate and feel for him. To me it was a gigantic turn off.

So, should you read it? absolutely! She is an amazing writer and IT IS a good book. It just wasn't for me.

Find the book at: StoryGraph