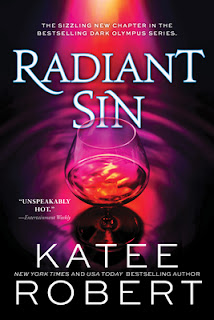 This is sadly, not going to be a very popular review.

I adore Katee Robert. But this one just wasn't for me. It wasn't a terrible book or anything like that, it just left me wanting more and very puzzled.

Every one of the books in this series follows a certain trope and/or subplot genre. Neon Gods is very much a Greek Mythology retelling; Electric Idol has the plus size influencer and the sweet bad boy, it is a very modern contemporary romance; Wicked Beauty, and my favorite so far has that hunger games/dystopian vibe. Radiant Sin is a murder mystery. The 'one house'/'one train' style that has always been so popular. Here lies problem number one for me, because I don't like murder mysteries at all. Even on my teen years when I read a lot of mystery it was never those.

Problem two- there were way too many characters in that house, and they all got their time on the page making it one very confusing mess. It was very hard to follow at times. I think this might be because the next book has 4 main characters, so they appeared a lot and there were a lot of hints to their complicated relationship, but there lies problem number three. Who is this book about? Is it a prequel to the four upcoming characters or is it a book about Cassandra and Apollo? That wasn't always clear. And all that leads to problem number 4, there was so much else going on that the things that should matter for Cassandra and Apollo's story was not completely clear. Like the story behind Cassandra's parents. I think I know what happened to them, but often there were hints that they were not killed. So, were they? were they not? I needed more of that, I needed more of her sister, I needed more of Apollo's side of things and his family and less, much less, of all the many other characters.

As I said in the beginning, not a terrible book. Fans of murder mysteries and used to a vast number of characters will have an easier time following and like it way more than I did.