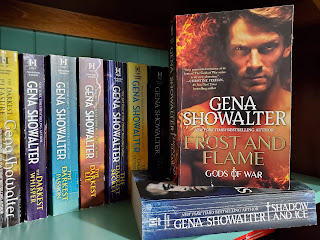 Another intense Paranormal romance by the fabulous Gena Showalter!

From Gena Showalter, the New York Times bestselling author of the Lords of the Underworld saga, comes Frost and Flame , the second book in the scorching paranormal romance series Gods of War.


Bane of Adwaeweth is the most feared immortal warrior in All War history. Possessed by a bloodthirsty beast, he will stop at nothing to win. Then he meets irresistible Nola Lee. He hates the power she wields over him, but she alone can rain vengeance upon his wife’s killer.

Unaware of her destiny to rule as queen of beasts, Nola battles illness, addiction and vulnerability. With Bane, however, she experiences pleasure for the first time, and only wants more. But being with him comes with a terrible price.


With enemies lurking around every corner, Bane and Nola must fight to survive. But time is running out, and neither can resist the sizzling attraction blazing between them. Will their romance save the beast and his beauty, or destroy everything they’ve come to love?

Book Review: 3 Stars
Sadly I cannot say Frost and Flame was as good as Shadow and Ice. In my mind, it almost doesn’t compare.
Bane and Nola kept ‘playing’ this game of ‘want you-don’t want you’ during most of the book. Although some tension is welcoming on a romance trope like that, this was a little too much. It made some sections of the book rather tedious.
I also didn’t appreciate that it had the exact same timeline as Shadow and Ice. Yes, it was nice knowing what happened to Nola while Knox and Vale’s arc was developing, but this replayed every single scene that involved Vale and Know with Nola and/or Bane, just of-course from Nola’s and Bane’s perspective. In some occasions that was interesting, in others it made the story repetitive. I found myself skimming a good part of the book.
All that being said, it was another great book by Gena Showalter. Bane’s character and his past experiences were touching, relatable, and made him easy to love.
Nola was also an interesting character, brave and strong in her own way. Her body may be frail because of her illnesses but her mind and determination most certainly are not.

Nola and Bane truly are perfect for each other. There was plenty of passion and chemistry between them and their personalities fit perfectly.
I may not have loved this one as much as the first book in the series, but I still liked it a lot and will most certainly be reading the next one.