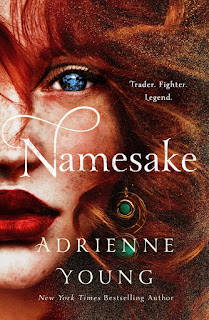 Trader. Fighter. Survivor.With the Marigold ship free of her father, Fable and its crew were set to start over. That freedom is short-lived when she becomes a pawn in a notorious thug’s scheme. In order to get to her intended destination she must help him to secure a partnership with Holland, a powerful gem trader who is more than she seems.As Fable descends deeper into a world of betrayal and deception she learns that her mother was keeping secrets, and those secrets are now putting the people Fable cares about in danger. If Fable is going to save them then she must risk everything, including the boy she loves and the home she has finally found.

I enjoyed Namesake a lot more than I enjoyed the first book in the series, Fable. Overall the book had a much better pacing. I remember complaining that although I liked Fable it lagged at times, but that really wasn't an issue here. There was a twist coming or something about to happen at all times, and because of that the plot as a whole was more exciting.

The story starts precisely were it left off in the first book, and Fable must somehow get out of the mess she finds herself in. But every step she makes has consequences, until all she holds dear is at stake.

My favorite part in this duology was in the first book, and it is here again, her relationship with Saint. These two are so bad at telling each other things and showing how deeply they care for each other. And yet, Adrienne Young managed to somehow make clear to the reader that there is love there- buried deep under misunderstandings and bad decisions, but it is there. Their last scene together made up for all of it!

I also rather enjoyed how she brought back a character from the first book that I thought we were no longer going to see. I can't tell you who it is, but you will enjoy it. Both this character's return, the friendship he develops with Fable, and getting to know him and his motivations better.

I had mix feelings about West. So much so that at one point I found myself rooting for that character that returned to the story (don't worry, there is no love triangle and nothing there. Just my personal wish). West's character went from book boyfriend of the year to whinny guy that needs to grow a pair pretty fast. I get why he was feeling as he was and I even understand most of his decisions, but he did get annoying.

The rest of the crew and many other side characters all got just enough page time to be memorable.