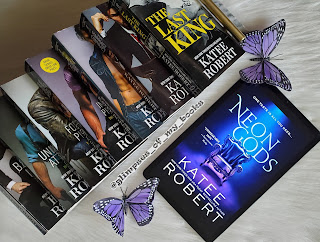 I absolutely adore Katee's Roberts books. She has a lot of books out so I can't say I read them all, but I've read plenty and I am yet to not like one. So, needless to say, the second I saw the arc available for Neon Gods I just had to have it. Thank you Sourcebooks Casablanca for feeding my Katee Robert addiction!

Society darling Persephone Dimitriou wants nothing to do with her mother's ambitions. She's biding her time until she's able to leave the ultra-modern city of Olympus and start her doctorate degree. The one thing she never planned on? Her mother ambushing her with an engagement to Zeus—a man with more than a few dead wives in his past. Persephone will do anything to escape that fate...even flee the sparkling upper city and make a devil's bargain with a man she once believed was a myth.Hades has spent his life in the shadows, and he has no intention of stepping into the light. Not even for the woman who flees into his territory as if the very hounds of hell are on her heels. But when he finds that Persephone can offer a little slice of the revenge he's spent his entire life craving? It's all the excuse he needs to agree to help her—for a price. She'll be his for the summer, and then he'll see her safely out of Olympus and away from her mother and Zeus.Hades and Persephone's deal might seem simple enough, but they both quickly realize it's anything but. With every breathless night spent with Hades, Persephone wonders at her ability to leave him behind. And Hades? Now that he has a taste for Persephone, he's willing to go to war with Olympus itself to keep her...

I went into this beauty pretty much blind. I saw "Katee Robert" and requested it. The blurb was unimportant. I still haven't read it, maybe I will before I post the review hehe

Because of that, I had NO IDEA what Hades was going to be like and I was not expecting him to be the sweet, caring, tormented soul that he was. Everything about him is perfection. As much as I like my bad guys in books I can't say I missed it here. He was a pure and wonderful soul with enough wickedness in the bedroom to make you want him all for yourself.

Persephone was a delight. The perfect girl on the outside with a desire for more behind the curtains. Her mother pretty much sells her to Zeus (the real bad guy in this story) thinking her perfect daughter will just go along with it. She finds Hades instead.

They are perfect for each other and have perfect chemistry. One thing on the outside and another to themselves. They both wear masks and slowly but surely peel those masks of for each other.

Another fabulous read by Katee and I cannot recommend it enough!