I am late to the party with this one and there are reasons for it. 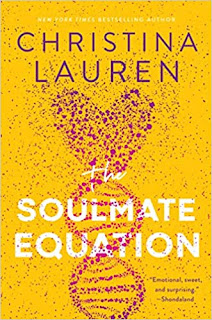 Reason number one: my least favorite trope- kids. It doesn't matter if it is single mom, single dad, big party of the story or small, kids in books are only ok when is not romance. There is nothing romantic about a kid... making the kid maybe :)

Reason number two: I adore Christina and Lauren's older books and series, but their latest books have all been mid range and since parts of the plot were already not my thing I was just worried I would dislike it.

I am happy to say I didn't dislike it, but it wasn't a 5 star book. Much the contrary, I skipped the audio book a few times because I got bored.

Here is the Blurb:

Single mom Jess Davis is a data and statistics wizard, but no amount of number crunching can convince her to step back into the dating world. Raised by her grandparents--who now help raise her seven-year-old daughter, Juno--Jess has been left behind too often to feel comfortable letting anyone in. After all, her father's never been around, her hard-partying mother disappeared when she was six, and her ex decided he wasn't "father material" before Juno was even born. Jess holds her loved ones close, but working constantly to stay afloat is hard...and lonely.But then Jess hears about GeneticAlly, a buzzy new DNA-based matchmaking company that's predicted to change dating forever. Finding a soulmate through DNA? The reliability of numbers: This Jess understands. At least she thought she did, until her test shows an unheard-of 98% compatibility with another subject in the database: GeneticAlly's founder, Dr. River Pena. This is one number she can't wrap her head around, because she already knows Dr. Pena. The stuck-up, stubborn man is without a doubt not her soulmate. But GeneticAlly has a proposition: Get to know him and we'll pay you. Jess--who is barely making ends meet--is in no position to turn it down, despite her skepticism about the project and her dislike for River. As the pair are dragged from one event to the next as the "Diamond" pairing that could make GeneticAlly a mint in stock prices, Jess begins to realize that there might be more to the scientist--and the science behind a soulmate--than she thought.

The premise was good, really good. The book gets its 3 stars almost for the premise alone. How cool would that be? to meet your soulmate through genetics? Christina Lauren did a great job at explaining, defining, and exploring that world. That part of the book was done brilliantly. That being said, that might be in part why the rest lacked a little. There was so much focus on the science that the chemistry between the main characters becomes somewhat forced.

River was robotic. Seriously lacked personality. I get that he is a scientist and they wanted to portray him a little aloof and rigid but it ended up with him coming across us uncaring and dull. I don't think I or many other woman out there would have forgiven him as easily in the end.

Jess was better. Her struggles and family life all felt very real. She is smart, kind, and a fighter. It is not easy to make in this world as a single mum but she sure tries her best. Any mother will recognize her morning struggles with her kid. Though that brings me back to the point I made in the beginning that there is nothing romantic about kids.

All in all this was not bad. The concept was great, the initial hate to lovers interactions were interesting, and even the way they are almost forced to get to know each other is great. But it lacks chemistry and it lacks romance.