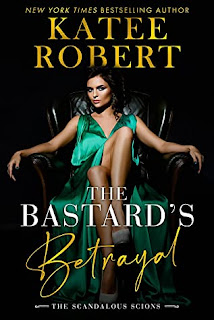 I adore Katee Robert, as a person and as a writer. I had the privilege of meeting her this past August and fangirled internally hard. I mean, one can't show the crazy and scare her off at first meeting right?!

I don't have tons to say on this one, all in all it was a fun read. I think that if you are new to Katee and this is your first book you will love it.  The problem for me is that I am not new to Katee and the series this book is a spin off of is one of my favorite mafia romances of all time. Not just that, but Rose, the main female character here, is the daughter of my favorite couple too. How does one top that?

Dante's devotion was commendable. He wants Rose, regardless of how their relationship started (she  shot him, he abducted her...) and is certain they can make it work. Rose is one badass heroine. Once she finds out Dante was lying to her she shoots him and carries on.  They have chemistry plenty and make a great pair. The first half of the book was awesome.

It is the second half I struggled with a bit. I wanted to know a little more about how they met, how that connection between them formed, and I also wanted a lot more mafia dynamic. Rose is meant to be heir of the family, so I needed her involved in the family business a little more.

All in all this is a great read. I think your final thoughts will largely depend on how much you like spin offs (I am rarely a fan), and how close you feel/how much you liked the O'Malleys. It is a 3 out of 5 from me!

She thought it was love.
Rose Romanov is a mafia princess, and everything that entails. Violently over-protective parents. A giant extended family, all ready to kill anyone who looks at her wrong. Learning to run a business that isn’t exactly on the right side of the law. So, naturally, when she meets a nice guy who isn’t in the life, she falls hard… Right up until the she discovers her new boyfriend isn’t a civilian at all.
But he betrayed her.
When Dante Verducci was sent on an undercover mission to evaluate the Romanov family for weakness, he never expected to have an instant connection with their unlikely heir. There’s something fierce and feral about Rose that calls to him. They’re alike, even if they’re both lying to each other during the months they date. Before he could figure out a new plan, Rose finds out who he really is, dumps him, and immediately enters an engagement with the heir of a rival family. Yeah, no, that’s not going to work for Dante.
Now he’ll do anything to reclaim her. Even go to war.