Two Young Adult reviews in a row? That has not happened in a very very long time. I obviously still read them, but just not as often anymore. Margaret Rogerson is one of those authors I will drop everything to go and read her next title. I absolutely loved her two other books: An Enchantment of Ravens and Sorcery of Thorns, so as you can imagine I was very excited about this one. 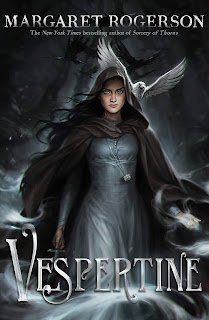 Blurb:
The dead of Loraille do not rest.
Artemisia is training to be a Gray Sister, a nun who cleanses the bodies of the deceased so that their souls can pass on; otherwise, they will rise as spirits with a ravenous hunger for the living. She would rather deal with the dead than the living, who trade whispers about her scarred hands and troubled past.
When her convent is attacked by possessed soldiers, Artemisia defends it by awakening an ancient spirit bound to a saint’s relic. It is a revenant, a malevolent being that threatens to possess her the moment she drops her guard. Wielding its extraordinary power almost consumes her—but death has come to Loraille, and only a vespertine, a priestess trained to wield a high relic, has any chance of stopping it. With all knowledge of vespertines lost to time, Artemisia turns to the last remaining expert for help: the revenant itself.
As she unravels a sinister mystery of saints, secrets, and dark magic, her bond with the revenant grows. And when a hidden evil begins to surface, she discovers that facing this enemy might require her to betray everything she has been taught to believe—if the revenant doesn’t betray her first.

One of the things I love the most about Margaret Rogerson's work is that she manages to catch my attention, wonder, and curiosity, within the very first few pages. Possessed soldiers? morally grey spirits? sold!

Artemesia likes keeping to herself, as a child she was possessed by a spirit and in order to free herself ended up with badly scarred hands. As an adult, all she wants is to continue cleansing the bodies of the dead so their souls can pass on. The life of a nun suits her fine. Needless to say things don't go according to plan. When the convent is attacked she ends up with a very powerful spirit within her- the revenant. He does not possess her, but she is not fully in control either. She needs to decide if she can trust the revenant to help her find out who is practicing dark magic and killing those close to her and consequently risk being possessed and having the revenant kill all around him.

The revenant doesn't want to be destroyed or be bound to an static object again. It definitely has a dark side that wants nothing but to devour all around it, but about half way through you stop seeing it as an "it" but as a person. The conversations between Artemesia and the revenant were all written well, they varied from serious, to funny, and profound. I fell in love with the revenant just as much as I did with Artemisia and I found myself rooting for their well being all the way.

This was a very unique YA fantasy and that is probably what caught my attention about the book the most. It is always nice reading something different that is well written and well thought out!