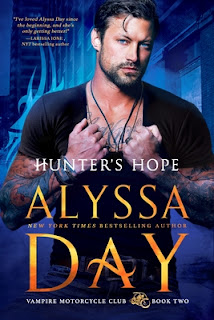 I had been waiting for this one since January. Bane's Choice, the first book in the series, was my first read of the year. I didn't plan for this series to be my first and last reads of 2021 but it is kind of cool that it worked out that way.

Here is the Blurb for Hunter's Hope:

Hunter Evans risked his life again and again as a firefighter until the night he died saving a child...only to be reborn as a vampire. Now the man who lived his life as the quintessential “nice guy” must find a way to conquer the deadly urges that threaten to turn him feral. When his own actions put a beautiful woman in danger, he vows to protect her…even from himself.Alice Darlington has a secret of her own: she sees ghosts. She thought she’d done a good job of keeping it under wraps—until now. A terrible threat from her past is hunting her down in order to use her power for dark purposes. Now she’s on the run and doesn't know who to trust or where to go.When Hunter and Alice team up to battle the dangers coming at them from all sides, they’re forced to rely on each other. But Hunter doesn’t know how long he can keep the beast inside him away from the woman it craves…

I LOVED the first book in the series, and I really really wanted to love this one. I liked it, but I didn't love it. The book relied way too heavily on comedy, which to many is not going to be a bad thing at all. But if you have been reading my reviews for a while you know romantic comedy is not my favorite romance subgenre.

It was nice that the second book was on Hunter, and we were not left wondering for too long what happened after his change. So although this can be easily read as a standalone, I think you will miss one very important part if you don't read the first book. And the first book was amazing, so you really should start there!

Hunter is an adorable and very sweet character. He used to be a firefighter and save lives for a living. He is struggling with the whole "being a vampire" thing.

Alice is artsy, brave, and has a sad past. The two of them make a sweet couple and you can't help but love them.

The book was funny and very entertaining. But as I said, I feel like it relied a little too much on that. Alice has a sad background and the "bad guys" obsession with her would have made a lot more sense if there was less comedy and a little more of that heavy past. For example, she sees ghosts- Why? What does she do to them? How is that power of hers useful to the warlocks? ...

Hunter's Hope is a fun read, but it is for the lover of romantic comedy and not me- a lover of heavy (or cheesy) paranormal. In other words, great book for the right audience, I am not that audience. It is a 3 out of 5 from me!