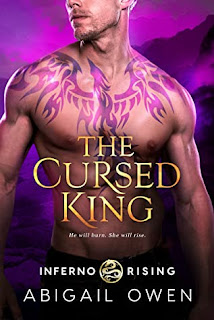 This series has been an absolutely delight and I am so glad I've read it. The Rogue King, the first book in the series is still very much my favorite. I discovered Abigail Owen through that book and have read a few of her other books since, this series -obviously-, and others. I highly recommend you all give this wonderful author a try.

He will burn. She will rise.Airk Azdajah, the rightful King of the White Clan, spent half a millennium being tortured by the false High King Pytheios. The only reason he’s alive is a curse— the man to kill Airk will be consumed in his own fire. Which is why Pytheios kept Airk alive, barely, unable to shift in his prison cage, driving the creature half of him into madness. Airk escaped, but he’ll never be truly free. What good is a king who can never let his feral dragon loose, never fly, and never lead his people? He’s better off dead.Angelika Amon is the last unmated phoenix. The problem? She has no powers. Zip. Zilch. Angelika hates being dormant, especially now that her three sisters are blissfully mated to powerful dragon shifter kings and are very much part of the fight to take down the rotting king Pytheios, their parents’ killer. What good is a useless runt of a phoenix in a battle to save the dragon kingdom?Desperate to find some way to help, she offers herself to Airk as a mate — just for political leverage. But a dormant phoenix is no damn use to him just like a dragon who can’t shift is no use to her. Until Pytheios sets his sights on Angelika for himself…

Airk was a great character. After hundreds of years being kept captive anyone else would have broken, he did not. His dragon however has gone feral and cannot be trusted not to be violent. Angelica is the sweetest and kindest of the sisters. It is literally impossible not to love her. But she is a phoenix with no powers. They are perfect for each other and complement each other well. Him without his dragon, her without the powers of the phoenix...

The issue I had with this book is that it focused way too much on secondary characters. As important as her sisters and their mates are for the storyline, they already had their books and could have taken a little more of a side role. And if that wasn't enough there were the wolves, the berserker, other new dragons...

Great main couple, great writing, good story, but just too much in one book. It is a 3 out of 5 from me.