August 25, 2019
YES!!! Another amazing paranormal romance author to add to the list. The Rogue King was phenomenal in every way and I cannot recommend it enough. 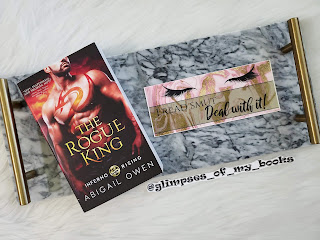 Kasia Amon is a master at hiding. Who—and what—she is makes her a mark for the entire supernatural world. Especially dragon shifters. To them, she’s treasure to be taken and claimed. A golden ticket to their highest throne. But she can’t stop bursting into flames, and there’s a sexy dragon shifter in town hunting for her...

As a rogue dragon, Brand Astarot has spent his life in the dark, shunned by his own kind, concealing his true identity. Only his dangerous reputation ensures his survival. Delivering a phoenix to the feared Blood King will bring him one step closer to the revenge he's waited centuries to take. No way is he letting the feisty beauty get away.

But when Kasia sparks a white-hot need in him that’s impossible to ignore, Brand begins to form a new plan: claim her for himself…and take back his birthright.

I have a soft for paranormal books, even more so for those containing shape shifters. And if there is a dragon? I buy it before you even finish telling me the book title. The problem with that? the disappointment that often follows. Not today! The Rogue King was everything I hoped for and more.

Kasia is a fire cracker. Brand has most definitely met his match in her. She has spend her whole life in hiding and learning to protect herself. She doesn't need a big dragon man to save her... that being said, she is struggling. Combusting into flames for no rhyme or reason, and Brand is able to calm her faster than she can do on her own.

Brand is the quite broody type. He has one purpose in life and that is to exact revenge on those who killed his family. Kasia falls into those plans perfectly... until he falls for her that is.

Their connection and chemistry was spot on. He calms her and she brings him out of his shell a little.

And now for the ending... omg!!!! It is not a cliffhanger but it DOES leave you wanting for more. I am desperate to know what will happen between the next couple and I guarantee you that you will be too!