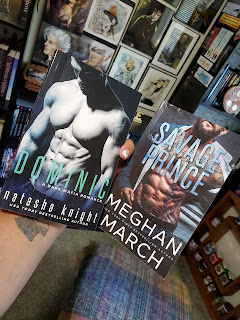 I was in a mood for a dark romance this week, so I raided my shelves and these are the books I came up with. I liked them both :)

Blurb: I do what I want and who I want. I don’t follow anyone’s rules—even my own.I knew I shouldn’t touch her, but it didn’t stop me. Didn’t stop me the second time either. Only made me want a third. My lifestyle suits the savage I am, and she doesn’t. But Temperance Ransom is my newest addiction, and I’m nowhere near ready to quit her yet.I’ll have her my way, even if it means dragging her into the darkness.Hopefully it doesn’t kill us both.

After reading all the reviews I confess I went into this book a little worried. Not because I minded that apparently there was 'too much sex' -as if that was ever a thing in erotica- but because the ending wasn't exactly an ending. I am not a fan of cliffhangers and I haven't read a book without owning the very next one in at least a year. I really really don't like cliffies anymore. And well, since Meghan March is new to me I didn't have the next books.

I am glad to say I really liked the story. Yup, it definitely has a cliffhanger. But the story has not developed enough for that to be a big problem.
And I guess that is the only reason I can't give 5 starts and the main reason people didn't like it much. It doesn't feel developed enough. I like the concept, I like the main characters, the plot... but in the end I didn't know much about anyone or anything. I mean... we don't even have the guys name in the end of the book! I don't mind that much, he is meant to e mysterious, but it does take some of the depth a story needs away.

Anyway... I already ordered the next book and I am looking forward to it!

Blurb:
DominicI was the boy who would never be king. The monster who could never be loved.Gia was just a job. Just another girl caught in a world of monsters.It didn’t matter that I liked the look of her.I didn’t care that she cringed when she saw my soul.I liked it.I liked her fear.And I wanted her.Monsters didn’t get to live happily ever after, though. I knew one day I’d have to go back. Because time neither forgave nor forgot.And neither did I.Old debts needed to be settled. Enemies punished. It was past time I returned to the family business. I’d been gone far too long.GiaAll my life, I believed in fairy tales. Not the Disney kind. Never those. I always knew life was darker than that.I was the daughter of a foot soldier. The sister of a snitch. A nobody.Monsters had been part of my life for as long as I could remember, but none as dark as Dominic Benedetti. None as cruel. None as broken.I had no illusions about what he was. I had no desire to save his soul. And I couldn’t care about his bleeding heart.But love isn’t always beautiful. It could be a twisted, ugly bitch.I’d always known this was the kind I’d find. The only kind that could touch me.Because some of us, we belonged in the dark.And Dominic and I belonged in the dark.

Well... this was quite something...
Dominic has ZERO redeeming qualities. He is sadist and he likes it! I mean... his new job is to 'train' girls for auction.
Don't go into this book expecting a guy that has some deep reason that makes perfect sense for what he does.

Dominic and Gia's journey wasn't pretty. Wasn't easy to read. It was full of blood, pain, and deceit. There was also passion of course. Two dark and broken souls that understood each other better than anyone else.


I did not understand or agree with anything Dominic did. Not in the beginning and not in the end. His reasons weren't good enough. But it didn't matter to me. It was the kind of book I wanted this past week. Dark, mysterious, with no redeeming qualities, and super hot and passionate. I got what I asked for!