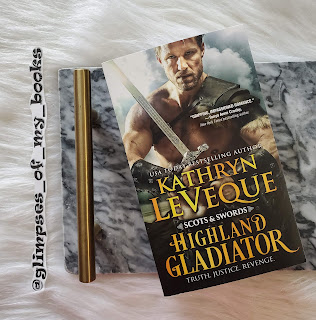 The title of this gem is so accurate and appropriate that if you were to describe the book in two words it would easily be Highland Gladiator! 😊

Truth. Justice. Revenge. Behind these stands The Scotsman's Sword
Gladiator meets Fight Club in the Scottish Highlands in a new romance from USA Today bestselling author Kathryn Le Veque...
When Lor Careston's quiet Highland village was attacked and burned, he felt helpless against the raiders who destroyed his home. Seeking revenge, but lacking the fighting skills he needs to execute his mission, he sets out to find the Ludus Caledonia―a mysterious fight guild that turns men into warriors.
Lor trains hard, proves himself in the ring, and earns a place with the very clan that decimated his home, having decided to set his plan for revenge in motion from inside the clan. But his plan didn't include Isabail Keith, a fiery lass who prefers broadswords to embroidery and isn't afraid to stand with the warriors of her clan. Lor thought the Keiths were his enemies, but when Isabail is threatened, he'll have to decide what he's willing to risk for the woman who has captured his heart and the clan that has become his home.

If you know anything of gladiators, or watched movies with them, many aspects of this book will be familiar to you. I love all that and so I confess when I read the title and blurb I had trepidations. How can a romance book also represent all that well?! Fear not, it did. Kathryn Le Veque made that world her own and built something new yet very much reminiscent to what we know. It worked beautifully!

The world building was very well written and the plot really well thought out. It is impressive how much information about their way of life, medieval conflicts, and fighting scenes she managed to put in just a few hundred pages while never letting us forget about the sweet and adorable romance between the main characters. On top of that the characters had depth and were easy to identify with and feel for. The story sucks you in and refuses to let you go.

Lor is adorable. He learns to use his body as weapon and becomes a tad dangerous as the story progresses but never stops being adorable. He is sweet, kind, loving, and it is easy to feel his heartache and need for vengeance in your own blood.

Isabail is a tomboy firecracker with a loving family and a misunderstood clan. Her savvy, tenacity, and good humor made her unforgettable.

I wouldn't describe this book as the most romantic or steamy. But it has its steamy moments and a very sweet and heartfelt romance. I would highly recommend and cannot wait for the next book!