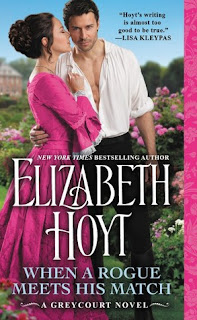 "The second novel in New York Times and USA Today bestselling author Elizabeth Hoyt's Greycourt Series features an enemies-to-lovers romance with her signature blend of captivating characters and sensual romance.
Ambitious, sly, and lethally intelligent, Gideon Hawthorne has spent his life clawing his way up from the gutter. For the last ten years, he's acted as the Duke of Windemere's fixer, performing the most dangerous tasks without question. Now Gideon's ready to quit the duke's service and work solely for himself. But Windermere wants Gideon to complete one last task, and his reward is impossible to resist: Messalina Greycourt's hand in marriage.Witty, vivacious Messalina Greycourt has her pick of suitors. When Windermere summons Messalina to inform his niece that she must marry Mr. Hawthorne, she is appalled. But she's surprised when Gideon offers her a compromise: as long as she plays the complacent wife, he promises to leave her alone until she asks for his touch. Since Messalina is confident that she'll never ask Gideon for anything, she readily agrees. However, the more time she spends with Gideon, the harder it is to stay away."

It is a little bit difficult writing a review on this one. I truly liked the characters and I was absolutely in love with the book after just 5 minutes listening to it. However, there is a huge chunk in the middle that was just far to slow and the ending was super rushed. Put shortly, the book had a great start, well thought characters, but poor execution. The constant pull and tug that made for a funny and interesting start to the book quickly became overused, annoying, and boring. In this 3-4 hour long book there is maybe 30 minutes in which Gideon and Messalina are happy together. Can that even be considered a romance book?

And the ending... the ending was rushed and just strange. Every single conflict got sorted in the last 20 minutes  and I am still not sure I get everything. There are plenty of lose ends and things that simply don't make sense.

All that being said, Gideon was a fabulous character. His past and how it affects his personality and his need for money and status were portrayed beautifully. He is ruthless when needed but he also sweet and kind without even realizing it. It is no surprise Messalina fell for him. The man is tormented, his past is painful, and his need to better himself and to help kids that are like he once was touching.

Messalina's character is a little more plain, but considering how impactful Gideon is that is understandable. She stood her ground as much as she could and refused to despair. She was likable and the chemistry between her and Gideon was spot on. It is just said we got so little of them together. It was mostly her thinking about escaping and him tormenting himself over the choices he had to make.

Just like I couldn't say the first book in this series was bad -but still only gave it 1.5 star- the same is true here. It isn't a bad book. Just isn't for me. I loved the characters and loved the tension, but I needed a better thought out plot. This one, for me, was boring, and when not boring rushed and confusing.