The Dream Thieves (The Raven Cycle): 4 out of 5 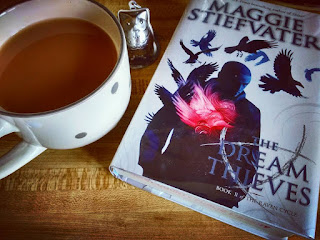 This was as good as the first book. And almost as slow...
I love Maggie Stiefvater's books. Truly. But the speed in which the stories develops on all of her books usually gets to me half way through. Nonetheless, great read.

The Dream thieves focuses mostly on Ronan. It explains and expands on what we find out about him and his raven Chainsaw at the end of the first book.
It also tells us more about Adam and his character grows (or changes, depending on ones point of view).
Don't expect it to be like the first book, where there is an equal amount of care given to almost all characters. Here Ronan takes center stage. If you didn't like Ronan, you might learn to like him as you get to know more about him. If you already did like him, you might fall in love. He is taught character to get used to, it took me a while on the first book. But I like him, I really do. He is charismatic and loving on his own way. And your heart might just melt with one little line from Adam to him at some point (I will not tell you what it is, I simply say: we all though Gansey did it! Like this, when you read it, you will know what I am talking about)

The story is rather straight forward. Not many twist and turns. No complex story lines... I think the biggest twist is the very last line. That being said, it is still somewhat intriguing.

Blue's family is still my favorite thing on this series. I really like them. Maggie Stiefvater did a great job on creating fun, complex and caring characters with unique personalities.
Oh, and the Gray man... how epic! Hit man's are not supposed to be that charming. It is rather hard to talk about him without giving spoilers. I will have to leave it at charming! I was annoyed whenever I read about him at first, and then, all of a sudden: boom! I like this guy! haha

We see a lot less of Noah here. But the one chapter were we get a lot of him is awesome! Blue goes to Gansey's house while everyone is out, it is just Noah and her... it is so sweet, so funny, so cute... there is no way in hell you are not going to love it.

There is very little romance here. That annoyed me tremendously. Either have romance, or don't. The middle of the road thing drives me nuts. This more than the pace of the book is why I have to give it a 4. You are there enjoying your mysteries and action and friendships... and then there is the phone call and later the drive (you will know when you read it). What?! So so out of place. Either there is romance, or there isn't. I don't even know what on earth that was. As you can tell, I am still annoyed about it! haha

Anyways... if you liked the first book, chances are you will like this one too! I know I did!