The Darkest Part of the Forest by Holly Black- 5 Stars 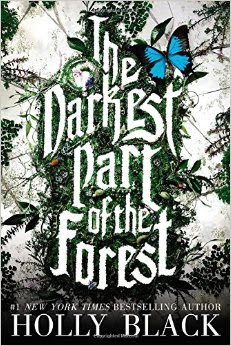 It has only been a few weeks since I discovered Holly Black, and although my tbr is absolutely huge, I just had to read another book of hers, so I got The Darkest Part of the Forest on my kindle. It did not disappoint.
Holly Black is as amazing writer and can do in one book what takes many writers a whole series to succeed at. The world she created was overwhelmingly well written and it fascinated me from beginning to end. Her style of writing is almost poetic, I felt like reading it aloud to the world. It was so so beautiful. I want to live in a world of faeries and I don't care if they are dangerous provided it is the world Holly Black created! -seriously-
I feel very confident in saying that since reading The Coldest Girl in Coldtown Holly Black has become my favorite stand alone writer! YA fantasy are my favorite kind of books and as far as stand alones go, no one writes better.

Ben and Hazel are siblings leaving in Fairfold, a town were there is a very fragile line between the world of humans and the world of the Fairy folk. They are dangerous and kill for fun. The locals know to stay away from the forest at night, the tourists are not so wise and often some end up dead.
As children, Hazel and Ben believed they were going to one day save the town from the fairies. Off to the forest they would go to slay monsters, Ben with his magical music and Hazel with her sword and unshakable bravery. But, they are still kids, and with time that changed. They start keeping secrets from one another and stop going to the forest at night.
All the while there is a boy with horns in his head in a glass coffin in the forest. He has been there for as long as people can remember. Always sleeping. Nothing and no one can brake through the glass. Ben and Hazel loved the boy as children, and told him all their deepest secrets. Little did they know the boy was listening.
One day the boy wakes up.
That is really all I can say about the book without giving away the plot. A lot happens both before and after the horned boy wakes up. The relationship between the two siblings is beautifully written. They love each other more than anything in this world and the things they do for each other are heartwarming (even if at times they are also a tad stupid!).

Jack and Carter are secondary characters, but of equal importance to the story. Specially Jack, He is a changeling, not human. Carter was kidnapped (swapped) as a child, his mother demanded him back, but also kept Jack. His character was one of my favorites. His relationship with Ben and Hazel is sweet, their friendship is touching.

The book is also action packed! At every page there is something else happening and you really gotta make sure you don't miss anything. I am a big fan of books like that, so this was right up my street! 😉

I cannot wait to dive in
another book by Holly Black. She is truly talented. It is not often that you find a storyteller of her caliber.