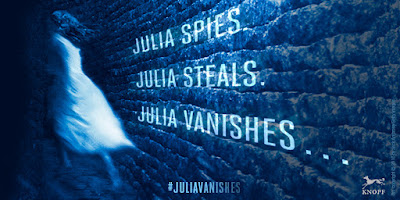 Book Blurb: "Julia has the unusual ability to be unseen. Not invisible, exactly. Just beyond most people's senses. It's a dangerous trait in a city that has banned all forms of magic and drowns witches in public Cleansings. But it is a useful trait for a thief and a spy. And Julia has learned- crime pays.
Her latest job is paying very well indeed. Julia is posing as a housemaid in the grand house of Mrs. Och, where an odd assortment of characters live and work: A disgraced professor who keeps forbidden books and sends her to fetch parcels containing bullets, spiders and poison. An aristrocat houseguest who is locked in the basement each night. And a mysterious young woman with an infant son who is clearly hiding- though from what or whom?"

The actual blurb in the book is a little longer, but I feel that it gives away too much of the story.
The book is not perfect, it gets a little slow in parts. But not enough to not deserve a high score.

I reminds me in parts of Six of Crows. I however struggled to get interested in the Six of Crows characters until Crooked Kingdom, there was not enough background and in depth character building till much later. In Julia Vanishes, because there are less main characters I guess, that is done better. I truly loved Julia. The heist is also a lot more realistic. It takes place on what I would guess would be an early 20th century world very similar to ours (if you forget all the magical being that is).

Julia is a relatable character. She is young but because of all she has been through in life she thinks she has it all figure it out. Weren't most of us like that once? She is brave, but never unafraid. I rather like that. Many of our YA heroins these days are fearless unless it involves a loved one. That is unrealistic. It often makes for a fun read, but it is very unrealistic.

Having grown up the way she did (her mum was killed- drowned as a witch- when she was young and she was taken care of by thieves) Julia struggles with her sense of right and wrong often. Towards the end of the book she wonders if she is evil, the truth worth of money, love, family and friends.

Having read it, I honestly don't know why the book is not better known.
Go Read.