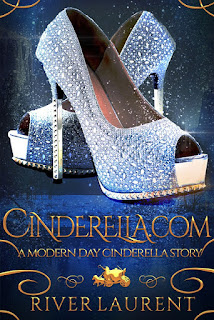 Before I begin: this is not an YA like most of my book reviews. It is an adult romance story. As the book covers states, A Modern Day Cinderella Story! For the book blurb look here.

Gosh, I loved this! Hence the review even though I do not usually write reviews here for adult books!
It was so so cute!

It is not easy to find a good fairy-tale retelling. Marissa Meyer is one of the few YA authors that manages that brilliantly. It is even harder however to find a good adult fairy-tale retelling. I tried one not long ago one meant to be an adult retell for Beauty and the Beast and it was terrible.
Cinderella.com however exceeded expectations. I was intrigued by the blurb: a cowboy prince charming?! But I was not expecting to be hooked in the story from the very first pages as badly as I was. I seriously could not put the book down. I read it in two sittings and if I didn't have to sleep to be up early next day it would have been in one.
The story was original, whimsical, funny, charming... I expected it to be over dramatic (dealing with an obnoxious celebrity), but it really wasn't. For the most of the book, I had a big smile on my face.
It was one those light and fun summer reads! -if that makes sense-

I fell in love with Cass on the very first page. Connected with her and wanted to be her friend almost instantly. She was so well written! I was rooting for her the whole way through.

Lars is hilarious. Mean... but we know why he is being (or trying to be) mean, which makes it funny. He thinks she is Tamara the rich brat! Don't blame him one bit for trying to put her on her place and don't blame him one bit for not knowing what to do with himself when he slowly realizes she is not exactly what he thought she would be.
We don't have much of a background for him and it takes a little longer to connect to him, but we find out why in the end. And its cheesy, but the kind of cheesy that makes you go 'aaahhh' LOL

The author also provided us with glimpses a both characters internal dialogues when around each other. And it made for a very fun reading experience!

The ending was adorable! I usually prefer slightly open endings, I like the endings to be realistic that way, life goes on so bow tied endings don't usually work for me. But I can make exceptions, and this was a great exception to that rule. The ending was darn perfect!