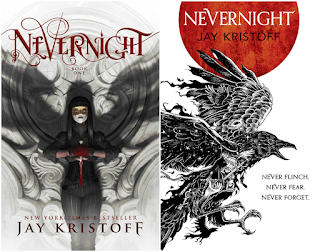 Nevernight was exquisite! One of the most original books I have read this year. On originality it loses only to another masterpiece by the same author: Illuminae!

I almost didn't read it. And that would have been a tragedy! Thank you my dear friend Giota (insta) for recommending it.

I was captivated by the book upon reading the very first page. It is told from two different perspectives narrating two very different 'firsts' using very similar vocabulary. The writing skill Jay Kristoff possesses is out of this world. I literally cannot think of one single author that can make two huge and very different moments in someone's life like those using almost the exact same words sound so different and so intriguing on their own. It was amazing. And that my dear friends, was only the first few pages...!!

Mia Covere is one very interesting heroine. What she wants in life? become one of the most feared assassins in the world! She suffered devastating and terrifying things at a very young age and wants nothing more than avenge her family. She is more than just a girl though, she is a girl with a dark shadow and a power to control shadows that she does not fully understand herself.
To gain the skills she needs to kill those who wronged her and her family she must take apprenticeship at a secret school for Blades (assassins) and pass a number of tests. The tests are bloody, violent, deadly... Jay Kristoff does not shy away from strong imagery and strong language.

I could explain the beauty of Mia and the book myself, but lovely Jessica (GoodReads) had the perfect words:
"Kristoff calls Mia an assassin who is to death what a maestro is to a symphony, but I felt the same way about Kristoff's manipulation of words and language. Whether Mia slipped into a room like a knife between the ribs or we met a man whose face was more scar than face, this reader felt like she was being spun and tossed by a master. In NEVERNIGHT, Solis might be the Shahiid of Songs, but it was Jay Kristoff who made me dance to the music of his story in ways I've rarely been moved. O so ridiculously highly recommended."

The friendships and even the rivalries in the book were all in tune and fun to read.
There is little romance, but the little there is is intense (be ready for some very R rated material). If you are a lover of romances this isn't for you. The romance is there, but it is not the main thing in Mia's mind at any point.

The other character worth mentioning is Tric. Mia meets him while in search for the school. Both are set in learning the skills necessary to become a blade and kill those who wronged them. They form a beautiful relationship. Tric is deadly, as is Mia, but he is also a lot more open with his feelings and much more approachable than she is. You will fall in love with him easily.

I am a weirdo, as you all know... so who did I fall for? The head of the school! The secretive and dark Lord Cassius. The ONLY one with powers like Mia. I was so intrigued about him and would love to have read a lot more on him.

So... after all this praise you are probably wondering why I am not giving it 5 stars right? Well, there are three reasons:
-1- Footnotes: Yup! the book has footnotes as some sort of world building... hated it!
-2- The assassin: liking it or not I will always compare female assassins now to my beloved Aelin from throne of glass, and Mia is a sad sad comparison. Don't even try to compare. Its probably best.
-2- The ending: Lord Cassius/Tric: what happened to Tric was very predictable. I saw it coming ages before it happened. And what happened to Lord Cassius I did not see coming at all and was very surprised and unhappy about it. I am intrigued to see what will happen in the next book...