May 11, 2019
This was not what I was expecting, but not in a bad way. I LOVED the story.
It was sweet and touching and had plenty of steamy moments too.
A good romance book all around! 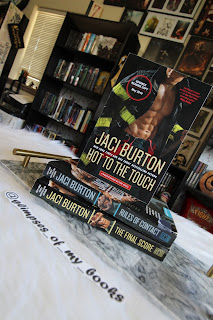 Blurb:
Firefighter Jackson Donovan doesn't look back—as a rule. So when his past comes roaring back to life in the form of not-so-damsel-in-distress Becks Benning, the last thing he wants to do is relive old times. No matter how tempting she makes it seem...Now thanks to his two interfering brothers, Becks is living with them while she looks for a new place and tries to pick up the pieces of her tattoo business that went up in flames. Which means a grown up, smokin' hot Becks is in his house, sharing meals, and digging up old wounds. And despite his better judgement, the more time he spends with this smart, artistic, incredible woman the more he wants her in his bed—and his future.Becks always had it bad for Jackson. Unfortunately for her, not much has changed—he's still honorable, hard-working, sexy as sin—and closed off. But there's more than one way to get to a man's heart and if Jackson doesn't want to recall old memories, she'll just have to help him make new ones. Because now that she's found Jackson again, she's not letting him go.

I am not sure why, perhaps because of the very steamy abs on the cover... but I was expecting a much more passionate story. Instead it is a story of love, lost, and overcoming life's obstacles. Nothing not to love about that, it was great. Just not what I was expecting...

As a former foster kid myself I can tell you all Jaci Burton did a fairly good job representing the whole thing. There are good homes, and there are bad homes. Some kids are runners, some keep giving the system a try until a good home comes along. To some it never does, and to some, like our firefighter brothers, things turn out well in the end!

The romance was beautifully written. Jackson and Beck are absolutely perfect for each other. They understand each other and complete each other. And let's not forget the chemistry! there is plenty of that between them!

I really liked Jackson, probably because I related to him on a personal level more than the others... he is hardworking and a protector at heart.
Becks was also a good hardworking character. A survivor and a fighter. I wanted her to succeed in the end in her business and in her personal life and I am glad she did.

Although this was Becky's and  Jackson's story I have to say that one of my favorite things about it was how much page time all the other awesome characters got as well. I suppose she was setting up the stage for the next books but I do hope she continues to give all the brothers as much page time as here as the series goes on.

Why not 5 stars? well, Becky was a little too pushy. People with pasts such as theirs are not always ready or want to talk about it and I didn't like how her character would not leave it alone. It made her come across rather whiny and annoying at times. Apart from that, fabulous book and I highly recommend it!