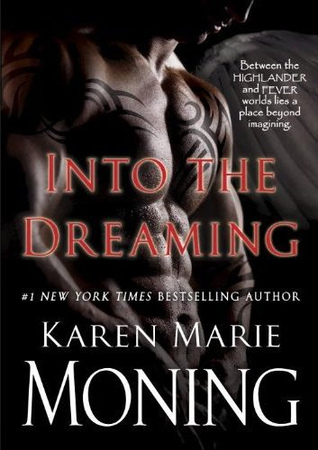 How to get over a Book Slump? Those who read a lot get asked that question rather often. I have 2 tricks: the first is to pick up a book by a favorite author that is of a different genre to the one you previously read (or at least a different sub-genre). I find it is best if it is something very different than the book that put you on a book slump to start.
The second is to always have a long series you love going on the background. I am currently reading 3 paranormal series. But here is the thing, I do not read as the new books come out. I read only when I need a trusted book to get me out of a slump. This series is a little old now and the other two are still ongoing (Black Dagger Brotherhood and Bewitched and Bewildered). All that brings us to Into the Dreaming, book 8 and last in this series. I have not read The Highlander series in order though, I still have 2 to go- eventually!

I believe this book is 14 years old now. Time flies hey?
Karen Marie Moning's Highlander series are all short, sexy, and entertaining paranormal romance books that you can easily read in one sitting (if you are a fast reader like me that is).
This one did not fail to deliver. Aeden, or Vengeance now, has made a deal with the Unseelie King that has cost his memory and in many ways his soul. He doesn't know who he is anymore and this very annoying woman who appeared out of nowhere keeps calling him 'Aeden' and acting as if they have known each other forever.
Jane has been dreaming of this gorgeous highlander for years. In her dreams he is kind, loving, and most certainly knows who she is. After she is transported into time by the Seelie Queen and meets her highlander face to face she is confused by his coldness and detachment. But she is not one to give up!
I really have no complaints. This was the perfect 'pick me up' book. I can now happily go back to my arcs :)

Free him from his ice-borne hell…

Stolen from his beloved home in the Highlands of Scotland, imprisoned in the Unseelie king’s dark, frosty kingdom, Aedan MacKinnon endured centuries of torture before becoming the icy, emotionless Vengeance, the dark king’s dispatcher of death and destruction in the mortal realm.

And in his century you both may dwell…

Aspiring romance novelist Jane Sillee has always believed that she was born in the wrong century, but she’s managed to make a decent enough life for herself—if only she could stop having those recurring dreams about a man too perfect to exist.

In the Dreaming you have loved him…

Haunted every night of her life by a devastatingly sexy Highlander who comes to her while she sleeps, Jane tries to write him out of her head and heart. As a child he protected her, as a woman he loves her.

Now in the Waking you must save him…

When an ancient tapestry bearing the likeness of her beloved Highlander arrives on her doorstep, Jane is whisked back in time to fifteenth-century Scotland, to the castle of Dun Haakon on the isle of Skye, where she is given one chance to save her dream lover…or lose him forever to the Unseelie king.

Caught in a deadly game between the light and dark courts of the Fae, Jane must find a way through the ice to the heart of her Highander. But will the love of one mortal woman be enough to defeat such ancient and ruthless immortal enemies?