Gemina by Amie Kaufman and Jay Kristoff- 5/5 stars (4.9 if I'm being really picky) 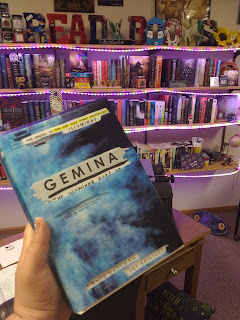 I finished reading this less than 30 minutes ago, and since I will be going on holidays tomorrow I thought it would be best to share my thoughts with all of you tonight while it still fresh.
I am speechless. If you force me to choose between Illuminae and Gemina I will still choose Illuminae, but this was good. Very very good. Minor things here and there (which is why I said "4.9 if I'm being picky") but nothing that detracts from its brilliance.
--This review will likely only make sense if you've read the first book as I am not going through plot details. You might want to read the blurb first if you haven't read Illuminae--

Things I liked:
- Once again we have a fabulous action packed sci-fi book with an epic romance story. I loved Nik and Hannah's story. This is actually the one part of the book that I enjoyed more than Illuminae. Both characters were well developed and so was their love story. In Illuminae I felt like only Kady's character was well developed. I don't think Kady would have been a very relatable character without Ezra, he was necessary, but he was also forgettable in some parts. More attention was given to Aidan. The same does not happen here, both Hannah and Nik (and even Ella) are essential and can hold much of the story on their own.
- The plot, once it got going, was fast paced, action packed, and very entertaining. I love the comical elements to it. The lollipop song/virus is just unforgettable! 😁
- NIK! I am in love with that boy. Another book boyfriend to the ever growing list! I have a thing for bad boys in books (as most of you know), So it is no surprise I think his character was epic. He is a convicted criminal, a drug 'lord', sassy as they come... And yet, he somehow manages to be a softie without loosing his 'bad boy' vibe. PERFECTION.
- The format in which the book is written is as cleverly done and put together as Illuminae was. I never thought reading a book through hacked documents, emails, IM's, etc would be something enjoyable. I could not have been more wrong.
- Old characters give an appearance towards the end bringing both books together without taking away the limelight from the new couple. I am still annoyed at Aidan, but at the same time I was pleased to see him again... conflicted feelings! hehe
- Aesthetically it is perfection. Even better (not that I thought possible) than Illuminae.
- Best scene in the whole book?! The conversation between Hannah's and Kady's fathers about the lollypop song. Priceless! ::::

Donnelly, C: Yes. I couldn't help but notice a rather obnoxious pop song playing through the elevator PA on the way to meet with strategy this morning. Now, my daughter insists on informing me daily that my taste in music is not exactly "chill."

Grant, I: Ha! My daughter says the same to me.

Donnelly, C: But then I noticed the same song playing when I got on the elevators to Reactor Control twenty minutes ago.

Grant, I: Yeah, it's playing on all the elevators.

Donnelly, C: It's playing on all the elevators, Isaac. Constantly

Grant, I: Yeah, I know. It's the new Lexi Blue single, Kady loves her.

Donnelly, C: What the devil is it doing playing on my elevators?

Grant, I: One of the maintenance guys got sent some malware. It's a marketing ploy from Blue's recording company. Erases any audio file data it can find and implants the new single instead.

Donnelly, C: Don't we have defenses against that kind of thing?

Grant, I: Yeah. It's one of these new-wave Trojans. Mutating virus. Kind of clever, actually.

Donnelly, C: Have you listened to the lyrics? I couldn't understand half of them, but the bits I caught sounded a little. . . risque.

Grant, I: Um. Yeah. The title kinda gives it away.

Grant, I: Let's just say it has to do with lollipops. And the licking thereof.

Donnelly, C: Jesus Christ, Isaac. I know you're under pressure, but-

Things I wasn't sure about:
- The Gemina theory... it felt rather unrealistic. Yah, I know, it is a sci-fi book... but still... It felt "forced" for the first few pages. Eventually it got a little more interesting, but not without being predictable. There was no 'WOW' moment. No shocking plot twist.
- Because it got predictable it did not feel as intense as Illuminae. I was invested in the story but wasn't emotionally affected by it when things meant to be upsetting happened (it is so hard writing reviews without spoilers, I hope you all appreciate the effort! hehe)
- The slang talk whenever Ella was involved gave me a headache. Waaaaay too much.
- Hannah and Kady are very similar characters. So much so that through the first third of the book I was getting a little bored. I prefer Kady to Hannah, not because Hannah wasn't great, but because she felt like a copy of Kady. As a POV, I prefer Hannah and Nik, their characters together are better written. But apart, Hannah is the weakest of the four main characters...