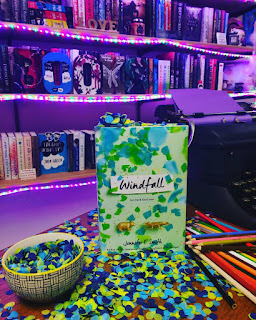 This was such a cute and wonderful read. I am rather surprised that the reviews on GoodReads are not all that.

Windfall is a story of friendship, of family, and of love. It is emotional but it is not 'brake your heart' kind of emotional- if that makes any sense.
The book doesn't primarily focus on the romance that blooms between characters, but rather on their individual problems, on their pasts and present, and on the connection between them that is tested as the story evolves.
There aren't many books out there that focus on good family dynamics and on the beauty of it. It was wonderful reading Alice's and Leo's relationship. From the very beginning you get that they are more than just cousins, but in a way, siblings. One wouldn't want to live without the other.

Alice's character was great! There is so much depth to her. It is hard to believe this was a fast read stand alone as you recollect in your mind all you learnt about her in just a few pages. She is broken inside, slowly healing... it is beautiful to see her slowly realizing how much of her broken heart has already been healed without her even noticing it. She is not a mature, strong, and independent character. She is a 18 year old still learning what life is really about and what she wants to do with her own life. Everything about her felt very real.

As did everything with Teddy. What 18 year old boy, from a poor home, upon winning so much money wouldn't make the same mistakes he did? It was inevitable. He was rash, impulsive, and compared to Alice, rather childish. He had a lot to learn, and fast. Money changes people, young people perhaps even more so. But it also changes those around us. His story and struggles felt as real as Alice's. 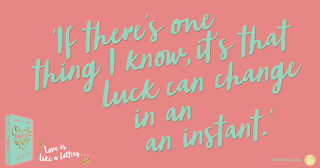 A strong theme in the book is that of grief. And that was not an easy one for me. I don't believe most people will find it as emotional as I did, but it was hard going over here. Lesson?! Don't read a book where the character grieves the death of her parents on the anniversary of your own mothers passing! Not clever. On my defense, I had no idea that was a theme in the book.
Anyway...back to the book.... the topic was really well written. I related with Alice every step of the way.

Leo's story kind of runs on the background of Alice's and Teddy's. Although I didn't care much for it I will admit many of you would appreciate the way she portrayed his relationship with Max. She didn't make a big thing out of it, it was just another romance story within the larger story. His character felt rather flat to me though. But, I do like his relationship with Alice, how much they know each other and how well they understand each other.
Loved Loved Sawyer. And therefore strongly believe he deserved a better ending. As it was his character felt a tad superfluous.

All in all, a great contemporary romance. Not the best, that title is reserved to Nicola Yoon at the moment. But very very good too!