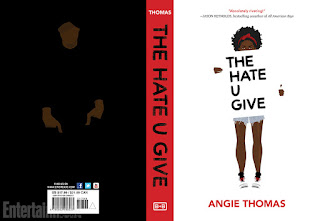 I am not looking forward to writing this review. Why? Because people are far too sensitive over the topic in which it touches.
So... before I begin I ask that you put your 'objective cap' on.
And if that is still not enough, here is a little personal disclaimer (before anyone starts accusing me of things that just aren't true): I am mixed race. As in- my mother is as white as milk, my dad as black as night.

You do not have to agree with me, but please don't put words on my mouth either.
All that being said, here we go...

First of all (and the easy part), the book was boring. It was hard to keep my concentration. The plot was slow and the characters were not developed enough. Too much of the book was concentrated on creating or re-leaving a polemical topic rather than creating an interesting story. Although the theme itself also did not work for me, the book could have been about magic and unicorns and it still would not get more than 2 stars from me. I can't even remember the name of all the characters anymore. If that is not a sign of bad writing I don't know what is.

The book was also very unrealistic for a book meant to be realistic fiction. The whole thing with the gang and the whole community miraculously one day standing up against it, or the fact one of the shop owners just 'gave' his shop away to Starr's dad after the fire is just ridiculous.

It is also very predictable. Did you watch the news a couple of years ago? If you did, you know the book. No need for reading it. Seriously! I don't know about you, but predictable books bore me to death.

I strongly believe this book is as successful as it is because of the current political climate we are in. My 2 stars are because the book had potential, the idea was a good one. It just did not deliver. Or it did... but only for one very particular audience.

Last but most definitely not least, the book engages in reverse racism. It is very one sided and I absolute despise that.
In two occasions for example the main character Starr threatens to brake up with her boyfriend simply because he is white. And... after checking... not once did Starr manage to speak of her boyfriend without bringing up the fact he is white. I am sorry guys, but that is as racist as a white person doing the exact same thing towards a black person.
A few snippets:
“You’re white, okay?” I yell. “You’re white!”
Silence.
“I’m white?” he says, like he’s just hearing that for the first time. “What the f*ck’s that got to do with anything?”
“Everything! You’re white, I’m black. You’re rich, I’m not.”

“I swear, I don’t understand white people.
Breadcrumbs on macaroni, kissing dogs on the mouth—”
“Treating their dogs like they’re their kids,” I add.
“Yeah!” says DeVante. “Purposely doing shit that could kill them, like bungee jumping.”
“Calling Target ‘Tar-jay,’ like that makes it fancier,” says Seven.
“F*ck,” Chris mutters. “That’s what my mom calls it.”
Seven and I bust out laughing.
“Saying dumb shit to their parents,” DeVante continues. “Splitting up in situations when they clearly need to stick together.”

Why is it ok to offend my white mother with white jokes but once anyone offends my black father with black jokes it is the end of the world? Have any jokes in this book been made about black people the world would have gone crazy over it!!
The world has moved on. Yes, racism still exist. But sadly, in the world we live today, it exists on both sides. On one side more than the other? yah, sure. But that does not invalidate the other or makes it okay to ignore it. I am against the statement (not the movement) that black lives matter. Which I feel was all the book was promoting (statement and movement). ALL lives matter. And I, therefore, do not fully support the message this book propagates.

It was a good idea, A great idea, We need more books on sensitive subjects like that. And for that I really wanted to love this. Had it been a more rounded book, with less white/cop hate, it would have been better. But sadly even than it would not have been great, the story was too long and the writing style too boring.