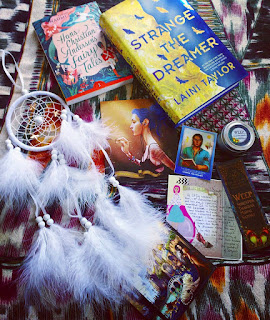 I honestly don't know how to correctly rate this book. It is not amazing but it had amazing moments. It was not awful but it took me forever to get into it...

I am very much in Love with Lazlo and Sarai's story. It was beautiful! -even if it only started 70% into the book-
The innocence in which they interact with each other in their dreams is beautifully written. Laini Taylor has this thing about her writing: it is so pretty it is almost poetic! Sadly, she also has the habit of writing with way to much characterization making everything so very slow. Don't get me wrong, the descriptions were beautiful, as they always are with Laini Taylor, but at times there were pages and pages of nothing but world building (if you are an aspiring writer, read it! It will teach you a lot about world building). As another reviewer put it: the book moved at grandfatherly pace. Laini Taylor, as per usual, has no regard for pacing. That being said, my grandma definitely moves faster 😁 hehe
It usually takes me 3-4 days to read a book of that size, a week if I am busy. This took me almost a month. I had to stop every few pages and walk away not to fall asleep on top of the book out of boredom. The pace did not pick up until about 80% in and that, after all the struggle to get into the book, made the book both feel like the longest thing I've ever read in my life, and the shortest...

Sarai was spineless. She didn't have a huge personality. But her character was somewhat interesting. Her powers are creepy, scary, and absolutely amazing all at one. The core of the story in a way, is her powers.... sadly even with that her character felt flat. I mean, she dies (this is not a spoiler as it is the very first page of the book!), and when she does die, you will feel nothing. Ok, she is dead, now what? book over right? oh, wait... you will know what I mean when you get there, because the book ending is also very very predictable.

The other characters, specially the godspawn are just weird. Some cute and fun scenes for sure. But mostly just weird. They are all -but one- spineless as well. Which is just ridiculous considering their power. It makes no sense. Even a fantasy book needs to make sense to be good. And you know what? the human characters are all spineless as well. Starting with Weep's hero!

There is plenty of emotion through out the book. But worry not about tears, it wont touch you in the same way Daughter of Smoke and Bone did (and I had problems with pacing there too, being one Laini Taylor's traits). You will not get invested here with both characters, Sarai being in so little of the book and being such a flat character... so all you have is Lazlo. You will feel for him. But when his troubles and pain involve her, you will read the emotion but not feel the emotion... I felt more connected with Nero than I ever did with Sarai. Once you read the book you will understand the weight of that comment!

Well, I am a sucker for romance, and it is the romance (on Lazlo's sides) that makes me give this book a few stars. Lazlo's vulnerability, sweetness, inexperience and innocence was fascinating and beautifully written. If it wasn't for those few sweet chapters the book would have been a disaster for me.

So...do I recommend it?!?! I have no idea. And that is the honest truth. Maybe read it if you are making good progress through your tbr and can afford doing so?