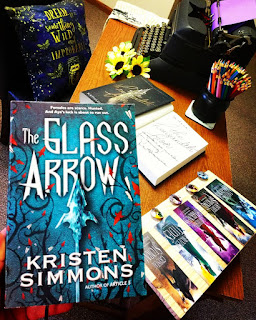 The book blurb (GoodReads): In a world where females are scarce and are hunted , then bought and sold at market for their breeding rights, 15 year old Aya has learnt how to hide. With a ragtag bunch of other women and girls, she has successfully avoided capture and eked out a nomadic but free existence in the mountains. But when Aya's luck runs out and she is caught by a group of businessmen on a hunting expedition, fighting to survive takes a whole new meaning.

Well, as you can guess it is another dystopia where women are property. I don't know what annoys me more: books were women are objects or books were women are heroines that need nothing and no one, specially not a man. Both can be done well, but both can be infuriating too. This sadly falls on the later.
It is hard to write a review were you know the book has the potential for a great plot, that a lot of people will praise it, but to you it just kind of fall short. You know that feeling of indifference you never want to feel when you finish a book?! That is more or less how I feel now.
But before I ramble about the things I didn't like...
- the romance story was very sweet. It was not over the top, just right! the characters learnt more about each other with time and their story developed at a good pace.
- Aya's bravery was a nice touch. She never gives up!
- Kiran was intriguing. He is a Driver and like all Drivers, he never speaks. So the way his relationship with Aya unfolds is rather interesting. It also makes the book unique. It was nice reading how Kiran would try to make himself understood by Aya. Their relationship was needles to say, deeper than words!
- I liked that the author did not set the main characters up to save the world. They felt more real like that. That being said, it did need a better ending with such a strong main theme.
- I LOVED the Wolf. Does it say much about a book that your favorite character was an animal and not the protagonists? What an awesome side kick!

Things I didn't like:
- It sends a message! And at first it sounds like it will be an interesting one: respect and equality regardless on gender! There is this messed up world were women are seen as nothing more than property reminding us of the struggles of our real world through time. But than the book ends without even hinting at a closure/solution/attempt to solve the problem. It is like the author is saying: "hey, woman are nothing, and there is nothing we can do about it". Now, I know that was not her intention, I went to one of her book talks... but sadly that is how I felt in the end.
Another reviewer said the book  propagated feminism. If that is the case, poor feminists, they have no hope... (spoilers on the next 4 lines) The book has a somewhat 'happy ending' for Aya and her family, but not really at the same time. Not when you considered her alternative to being a piece of breeding property is living with a bunch of people who fake to be mute to stay alive and literally cute the vocal cords of anyone that tries to help those outside their group...
If you want to write on such a huge topic, you need to invest on it a little more. Part of me understands why it was done this way, it is a stand alone after all. But this topic is not one that can concentrate solely on a single persons issues and disregard the bigger picture. It ends up having a very different effect to the one intended. The cause for equality ended up coming across as something hopeless.
- The beginning of the book when Aya is captured is rather slow. Most of it is spent on Aya plotting a pointless escape time and time again. It got a tad boring.
- The world building wasn't great either. The whys and hows of the world she created are not well expanded. We are given a very basic 3-4 paragraph explanation and it makes no sense how it all got from one extreme to the other. It makes the story rather unrealistic.

Conclusion:
I liked the book. It has a fast paced, easy to read  plot. Aya and Kiran's 'boy meets girl in difficult situation and helps her get out of it story' is cute (that was long! hehe).
The thing is, there are so many great books out there that when you compare The Glass Arrow to them it just falls short. It lacks depth.