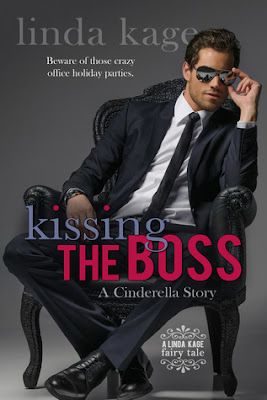 Kissing the Boss is the second book in the "Fairy Tale Quartet" by Linda Kage. The first was A Monster Among the Roses (review here), inspired by Beauty and the Beast. Kissing the boss was inspired by Cinderella and it delivered in every possible way!

Here is the blurb (GoodReads):
What’s the one thing you shouldn’t do when your boss is your ruthless evil widowed stepmother who hates your guts more than anyone? Kiss the man she’s interested in.So what does Kaitlynn Judge find herself doing?Yep, she kisses the one man her stepmother currently wants, who also happens to be the CEO of the company where she works.Can we say doomed?After the death of her father, Kaitlynn's life has been stuck in a rut. But that begins to change after meeting a dashing stranger during the office Halloween party. Now she has to navigate vengeful stepmothers, meddling step siblings, and gorgeous guys in hot pursuit to reach her happily ever after.While making a detour from the fantasy aspect, this contemporary take on the Cinderella story continues to cling to a few of our favorite traditions. You’ll still find the unmerited oppression along with fleeing women, missing shoes, mouse companions, magic wands, pumpkin-like rides to the big bash, and so much more. So rest assured, it’s all familiar and yet quirkily different.

I absolutely loved this. It was even better than the first book.
The characters were amazing and the humour was spot on, I burst out laughing many times.
Kaitlynn has big dreams, her father's company is everything to her and she wants to own it all some day. The only problem is that her father left he company to her stepmother and she absolutely hates Kaitlynn. I found Kaitlynn rather naive and I was worried about that at the start of the book (she is working for free for her stepmother at the beginning of the book). But as the story progressed I started to appreciate her naivete, it made for a sweet tale, as fairy-tales should be.
Ezra owns half of her fathers company, her stepmother sold it. He loves what he does and has no intention of giving that up. Kaitlynn and Ezra don't know who the other is when they meet, and although the attraction is undeniable things get complicated fast.
Ezra was perfect. I was so very glad to see him again and find out what happened after he lost the bet to his sister and brother in law in Monster Among the Roses. It was hilarious! I dare you to not laugh at the fake boobs 🤣
Kaitlynn's step siblings were the highlight for me. I really really hope one of the other books is on Brick, the guy is such a sweet heart and so not worth a penny all at the same time!

The plot was original, fun, and sweet! Everything you could have hoped for in a fairy-tale retell. I cannot recommend this enough and I am dying already for the next book!!!