Shift Out of Luck (Brimstone Inc. #2) by Abigail Owen 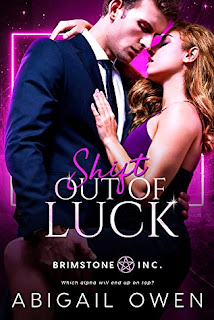 Abigail Owen was a new author to me last year. I was given a copy of The Rogue King and fell in love. So much so I added her book to my local book club list (Q&A with Abigail here). So of-course, when I saw this beauty I just had to read it. It was paranormal romance heaven! What pnr lover does not enjoy a good shifter story?

The Blurb:
The Montagues and Capulets have nothing on the Canis and Banes wolf packs. The two have been feuding for ages. The brutal murder of the Banes’ alpha only added fuel to the fire. And now there’s only one way to bring peace—the current alphas of each pack, Marrok and Tala, need a mating of convenience.

Tala has her doubts. A thousand of them.

But Marrok has plans of his own, and nothing and no one, not even Tala herself, can resist an alpha...

This novella was previously self published as The Worse for Were but has undergone a complete re-edit. Scenes were added, things were changed, but the kissing still remains!

After two terrible books in a row (I didn't even bother writing reviews) it feels wonderful to read a winner!

Shift out of Luck was a short fun read that I will undoubtedly read again someday.
Two alpha shifters need to lead together two pacts that hate each other. What could possibly go wrong? Well, for one, their inner wolves might not like the other being en-charge all that much...
Tala and Marrok can be described in similar terms. They are both loyal, strong and hard working alphas that will do anything to protect their packs. The chemistry between them was sizzling!
The dynamic between the two main characters is what I enjoyed the most about this little novella. I am very fond of my over protective and overbearing alphas and having two of them, together, made for a interesting read. The little twist in the end, the reason why Tala's wolf was being an ass was pure perfection. That was a moment of brilliance in Abigail's part. I am sure some readers saw it coming, I DID NOT. It was unexpected, a "duh that should have been obvious" moment, and therefore perfect.

All in all I cannot find fault with this little gem!
Find the book at: GoodReads