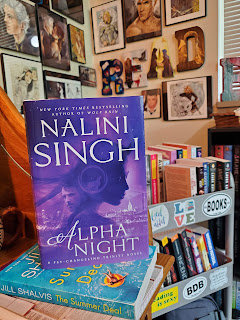 Nalini Singh is a force to be reckoned with in the paranormal world. Her series Psy-Changeling Trinity and its original series Psy-Changeling are fabulous works of art. She is no shadow of doubt a master of her craft.
Although you could read this as a stand alone, I don't advise. There are things that will be hard to understand if you do. You can however read this side series (Trinity) without having read the original. Here are reviews with links to the 3 previous books:
Silver Silence (Psy-Changeling Trinity #1) by Nalini Singh
Ocean Light (Psy-Changeling Trinity #2) by Nalini Singh
Wolf Rain (Psy-Changeling Trinity #3) by Nalini Singh
Blurb for Alpha Night:
Alpha wolf Selenka Durev’s devotion to her pack is equaled only by her anger at anyone who would harm those under her care. That currently includes the empaths who’ve flowed into her city for a symposium that is a security nightmare, a powder keg just waiting for a match.Ethan Night is an Arrow who isn’t an Arrow. Numb and disengaged from the world, he’s loyal only to himself. Assigned as part of the security force at a world-first symposium, he carries a dark agenda tied to the power-hungry and murderous Consortium. Then violence erupts and Ethan finds himself crashing into the heart and soul of an alpha wolf.Mating at first sight is a myth, a fairytale. Yet Selenka’s wolf is resolute: Ethan Night, broken Arrow and a man capable of obsessive devotion, is the mate it has chosen. Even if the mating bond is full of static and not quite as it should be. Because Selenka’s new mate has a terrible secret, his mind surging with a power that is a creature of madness and death…
The Review: 4 Stars
Nalini Singh is yet to write something I don't love. This was yet another paranormal romance heaven!
When it comes to pnr I have a huge soft spot for shifters and the whole "mate at first sight" dynamic so I was sold on this book from the very beginning. A lot of times this kind of topics are followed with "I can't be with you because of this and that" but that is not the case here, which made the story stand on his own. Ethan has a lot of issues. Having his background it is outstanding he still has any empathy left in him at all. The moment he meets Selenka he knows he belongs to the alpha wolf and he is not letting go. No chance. For once, he can feel something, belong to someone, be loved... and he will do everything in his power not to lose that.
His mind is giving up on him. After years of abuse he can't hold on much longer. But he is not giving up without a fight and he is going to make the most of every minute he has left.
Selenka is an alpha wolf with a lot on her plate. Her pack loses someone at the very beginning of the book and the problems just keep piling up. Having Ethan by her side helps in ways she could never have imagined or even hoped for. She knows he has issues, but can she help him save himself?
Ethan was a delight. It was (I think) pretty obvious from the beginning what the power inside him that he was so afraid of was. And so, if I had one negative about the book, it would be that we didn't need to wait that long for that to come to the surface. It took way longer than  necessary.
Selenka is a force to be reckon with and it was nice to see her standing on her own but no longer alone. Having the most powerful Arrow as a mate made them one very scary couple.
I love all the interactions with the couples we have grown to love too. Specially our lovely bear Valentin. I think the friendship between them is fabulous and it makes perfect sense.
In short, another phenomenal read by the queen of pnr!
Find the book at: GoodReads - Inklings Bookshop
In support to indie stores who are struggling right now no Amazon link will be added. The indie store above IS offering free shipping at this time! Give them a helping hand! Thanks :)