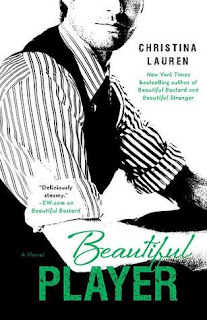 As some of you may know the Beautiful series is my current obsession! Each book in this series has been better than the other.

Beautiful Player was the funnest! I burst out laughing more times than I can count. Check out the Book Blurb here: Goodreads- B. Player

We know a bit about Will by now from Beautiful Stranger. He is a Player. He schedules his 'girlfriends' just as easily and as simply as one would scheduled daily work outs. He is also loyal, friendly, and a lot of fun. It is no surprise that Jensen, his childhood friend, suggests that his sister Hannah contact Will in order to get out, meet people, make friends...


When Will meets Hannah, his friends baby sister, he takes her under his wings and promises to teach her to have some fun and a better work-life balance. He introduces her to Chloe and Hannah, takes her out for runs and drinks.
But, Hannah is not what Will expected. She is not the shy baby sister anymore. She is a full grown woman, with no filter when she speaks, goofy, very open and even flirtatious. And lo and behold, the girl had a crush on him for years. She doesn't trust him though, she knows with him all she can have is fun and she is just another number to his list of conquests. And she is ok with that, she does not want anything serious herself.

They didn't expect to have such an amazing chemistry and their blunter is hilarious! It becomes even funnier when Will gets clearly put under her spell. Where is our Player gone?

Now for Beautiful... I read the books a little bit out of order, book 4 before 3. But it didn't impact my reading much. I knew Will had someone but no more than that. And in a way, the way I read was nice, because I had just met Hannah's brother, Jensen.
So...Beautiful is the last book and brings us a new couple: Jensen and Pippa.
Pippa is at a difficult time in her life, she hates her job and has just caught her boyfriend with another woman. So her best friend Rubby (book 4) invites her on a road trip with her and Neill, Will and Hannah. On her flight to Boston she embarrasses herself pretty bad -gets drunk and talks about her ex non-stop- to none other than Jensen, Hannah's brother. But she has not at this point met Hannah, or her brother... their paths cross again at Max's and Sarah's house at their 3rd kids birthday party!
Jenses is divorved and although it has been years he is not exactly over it yet. He is over the ex wife, but not the hurt that came with it.
They are civilized around each other, there isn't much heat and attraction as there was with the other couples in the previous books. It is all a little bland. They end up together only when Jenses' ex wife appears and he lies to her that he is now married.
I didn't dislike their story, but in my opinion it was the weakest of them all. I would have given it a 3/5 if the book was only about them

BUT- it wasn't. At least 45% of the book was on the characters we have come to love. It was a goodbye of sorts. We got to see how all relationships have evolved, how their lives have changed, and it was BEAUTIFUL. I am not gonna lie guys... I got emotional.

This series has been worth every second I spent reading it.