Without Merit by Colleen Hoover - 2.3/5 Stars 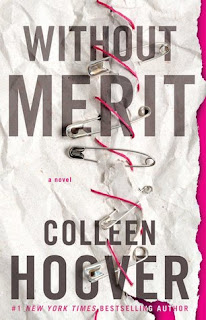 I don't really know exactly what to say about this book. It wasn't bad, but it wasn't good either...
Much ado about nothing seems the best way to describe the whole book for me. Too many secrets, too much crazy, too many issues... and yet it all felt flat. Whatever message she was trying to convey was lost in a sea of random thoughts and actions.


The Voss family is anything but normal. They live in a repurposed church, newly baptized Dollar Voss. The once cancer-stricken mother lives in the basement, the father is married to the mother’s former nurse, the little half-brother isn’t allowed to do or eat anything fun, and the eldest siblings are irritatingly perfect. Then, there’s Merit.

Merit Voss collects trophies she hasn’t earned and secrets her family forces her to keep. While browsing the local antiques shop for her next trophy, she finds Sagan. His wit and unapologetic idealism disarm and spark renewed life into her—until she discovers that he’s completely unavailable. Merit retreats deeper into herself, watching her family from the sidelines when she learns a secret that no trophy in the world can fix.

Fed up with the lies, Merit decides to shatter the happy family illusion that she’s never been a part of before leaving them behind for good. When her escape plan fails, Merit is forced to deal with the staggering consequences of telling the truth and losing the one boy she loves.

This is only the second book by Colleen Hoover I have read and I can see she has a very clear style of writing. Darker themes, good pacing, troubled characters... I like that, it just wasn't successful here.

I think one of the main problems with Without Merit is that although it has the potential for a good story it tries to accomplish too much, it tried to touch too many issues at once and it does therefore loses focus and ends up not representing those issues well. Much the contrary, it gives them a rather bad representation. She also appears to be trying to create quirky characters with interesting names and weird habits. I usually like that, but here it is just over the top. So again, lost of focus. I was actually confused as to what the book was about for a while. Every time I thought I had it figured out something else got thrown in. And do I know what it is about now? Family drama is the best I can come up with.
I like that she tried/tries to write unique stories, but this sadly didn't really work.

Merit was not a bad character. A tad stupid, but not unlikable. And the thing is, that is how I felt for almost all characters. They weren't bad, just all of them (apart from Mr Perfect- Sagan) were stupid and selfish. Young and naive. A good representation of their age but too much of the same. I didn't dislike them, but they all frustrated me. And relating to them was impossible too because there was just too much going on, the reader never really gets to know any of them. Merit perhaps... but even her we don't fully understand till almost the end.

Another thing worth mentioning is that this is not really a romance. There is actually very little of it. And the little that there is is a tad disturbing. Sagan is meant to come across as Mr Perfect and to me he comes across as rude and inappropriate. Merit spends the whole book thinking he is dating her sister and that is because it very much looks that way. I am still not sure he wasn't and I have finished reading the darn book. Was he? Is he? I mean... towards the very end he walks into the kitchen and goes to her sister for a 'good morning beautiful' and a kiss moment, not Merit. What girl is ok with that? Soooooo wrong! (sorry, I know that is a mild spoiler but hopefully you will be as confused as me and forgive me for it) And that is if we forget the scene earlier when he kisses her to prove a point! I won't tell you the circumstances to not spoil it for you but I was mad! That does not help, that makes things worse. You don't mess with the head of someone you know is depressed. That was very badly written and a very bad representation of depression and how to deal with it. But than, it is as I said before, she tried to touch so many issued in just a few hundred pages that everything suffered for it.

I don't think it was all bad, there were good moments. The story was promising and I did finish it in one sitting. But the felling afterward was of indifference. Who wants to feel that after hours reading the same book?