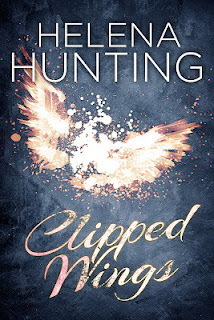 Clipped Wings 5/5 by Helena Hunting was the perfect New Adult Romance novel. It had the passion and the drama you would expect from an NA book.


We have Tenley, a lovely girl broken by the events of a year past. But not a little broken, she is shattered. I would be in her shoes too... Finding out what happened to her is devastating.

Our boy is Hayden. He has the bad boy look, all tattoos and piercings. That being said, he is one of the sweetest NA males I have read in a while. He is also broken, the tragedies of his past follow him as well.

It is the mutual understanding they have of each others pain that makes their relationship unique and beautiful to read.
Hayden is a tattoo artist and their relationship truly begins when Tenley decides to display her pain through ink. A massive tattoo in her back, on top of her old scars. Hayden has tattoos he chose for that same reason and he knows this won't fix her. Her pain is a year old, he has struggled with his for 7. But he understands that although this won't fix her, it might be what she needs at the moment. And since he is already very attracted to her at this point and not willing to let anyone else touch her, he agrees to the tattoo.

Their need for each other becomes stronger and stronger but neither is willing to talk about the past. It is their refusal to face the past that causes all the drama in the book.

I was blown away by their story. It is intense, heavy, hurtful.
Tenley is not your usual hurt girl in NA. She doesn't put up a fight. She doesn't push him away. Much the contrary, she lets him in. She doesn't tell him what happened to her, but it doesn't take long for her to realize he helps her inner demons. It sounds like she is selfish put it like that, but once you read the book and know her pain you will understand that she isn't.
Hayden is... well... I swoon! He is sweet, caring, and broken. He understands pain like no one else. He cares for her like no one else. 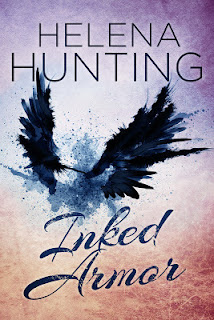 Inked Armor was the continuation of Hayden and Tenley's story. The beginning was really good. I liked that the author did not keep our babies away from each other for long.

Clipped Wings focused more on Tenley's past, and Inked Armor focuses more on Hayden's. The problem is that both their pasts are marked by death, both suffer from nightmares, both struggle to talk about it... in other words, the books ended up very similar to each other and although I love Tenley and Hayden I couldn't help but feel rather bored half way through. In my personal opinion it would have been best to have the first book 100 pages longer and intercalate their past stories than to have a 356 pages book dedicated to telling them separate.