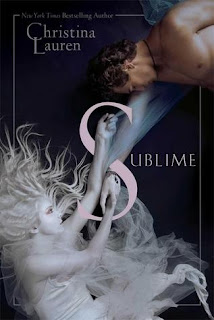 Sublime started off really well. I thoroughly enjoyed the concept.
It is a story a troubled boy and a strange girl that is not really a girl. They understand each other perfectly and become obsessed with each other. The book explores the lengths the boy is willing to go to be with the girl he loves.
The Blurb: Sublime

I was captivated by Lucy's story and very much looking forward to figuring out how and why she was back from the dead.
Her connection with Collin was intriguing. We don't find out until much later in the book how and when their connection was formed and I thought it was rather clever. Yes, there is a certain amount of 'insta-love' but that is one of Christina Lauren's trade mark, I don't mind it. I actually find they write those really well.

I believe the book was all in all very clever. It is a tad morbid once you start realizing exactly what their connection means and it got my heart racing a little faster. But that makes the whole thing more interesting.

As per usual with Christina Lauren the writing style was phenomenal. Everything is well described, there is both a magical and an eerie feeling to the setting of the story. And although all is really well described, at no point does it becomes overbearing as is the case with so many books.

My issue with Sublime is with its ending. It felt rushed. I suspected it would end the way it did but it needed to be developed further, it needed more details.  I went back to the book now to make sure I am giving you guys an accurate description---> the book ending is written on the last page, front and back. That's it. When I finished reading it I turned the page expecting it to continue... It made very little sense and left me rather confused. It was far to abrupt and created more questions instead of giving closure.
I get what they were trying to do, the feelings they were trying to evoke... but I guess it just didn't work for me. And after reading a few other reviews, that sadly seems to be the overall feeling...