Sweet Victory was GREAT! I am struggling to decide if I like this one better than the first book or not - Seducing Cinderella - Decisions decisions... let's see if writing a review helps me decide hey? 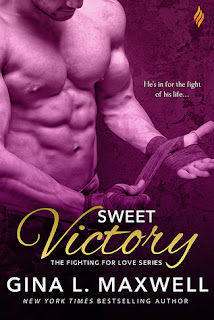 Here is the Blurb:
Sophie Caldwell might not like asking for help, but help is what she needs if she’s going to save her family business from her uncle. Her grandma left one rule for Sophie if she wants to gain sole ownership before she’s thirty—get married. Yeah, fat chance of that happening since she hasn’t had a boyfriend in years, and now she can’t get her uncle off her ass.British-born MMA fighter Xander James has never lost a fight, and he’s not about to start now. He’s on the brink of a comeback that could make him a UFC champion, but his landlord wants to take away his last chance by shutting down his gym. Hell, no. Fortunately, his landlord’s niece has a problem of her own. Time for a proposal she can’t refuse.

I am not usually into the good boys on books and yet this whole series is full of them and I can't get enough. What is up with that Gina? Xander has a heart of gold, no one in their sane mind does what he did for Sophie just because of attraction. I loved his swagger and fun personality as well as his hard working ethic and big heart. And of-course, being sex on a stick helps...

Sophie was a force to be reckoned with. I am half in love with her myself. She works hard, has a sharp mind, and a feisty personality to go with it; she is absolutely perfect for Xander.
They may have come together in rather unusual circumstances and I confess I wasn't sure to start I was going to like that but Gina made it work. As they get to know each other and the heat between them turns into more you will fall for them too.

I think my favorite scene was when our boys gave Xander words of advise. It was nice seeing them happy but also recognize where things could have gone wrong for them. Even nicer was to see Xander taking in their words and not just ignoring it. I think he was the most mature of all the boys.

All in all another fabulous book by Gina, but I think I will still choose Seducing Cinderella over this one just because I liked clumsy shy Lucie a little better than our feisty Sophie. That being said I feel bad doing that because I did love Sophie... aaaahahhhh *screams in despair*

Find the series at:
GoodReads
Amazon