April 12, 2019
Another sweet read by the fabulous Erin! Needing to Love You was fast paced, charming and the main characters had just the right amount of chemistry. 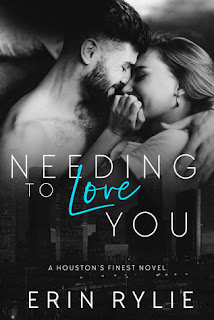 
Carlos Ramirez has always prided himself on two things: being damn good at his job on the Houston police force and being able to land any woman he wants. When a devastating car accident leaves him crippled and in excruciating pain, he begins to rely too heavily on his prescription painkillers. The only person who can help him heal is the only woman who has ever rejected him—and on more than one occasion. Living with Kelsey while he works through physical therapy wasn’t anything he ever expected to happen, but it might just be what he needs.


After a divorce that left her doubting her ability to love, Kelsey Byrne wants nothing to do with relationships. Unfortunately for her, the only man she could see herself loving needs a place to live and help while he recovers. She had a hard time pushing him away after a one-night stand, so how can she possibly keep him at arm’s length when he’s in her house every day, playing with her son, cooking her meals, and leaving her cute notes every morning? Carlos may be working his way into her heart one sweet gesture at a time, but can she give him everything knowing that she’s more than a little broken inside?


Carlos is a wonderful character. I think just about everyone that read the first book in this series liked him and was excited to read his book. He doesn't lose any points here, still the same charming and impossible not to love guy we met before. His story does get a little sad though. My heart broke for him.

Kelsey and Carlos definitely have the right amount of chemistry going between them. All their intimate scenes were written flawlessly.

The book lost a start for me because I did not connect or like Kelsey's character all that much. She came across a little childish at times.

What would I like to have seen more? More of the previous couple would have been nice.
All in all it was a solid contemporary romance read.

The ending is in a way similar to the first book- it ends with a cliffhanger. Not on the current couple but on the couple to come.