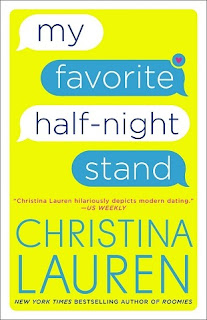 I love Christina Lauren and I never thought I would have to write a review less than positive for one of their books. But, here we are... I both loved it and hated it!


Millie Morris has always been one of the guys. A UC Santa Barbara professor, she’s a female-serial-killer expert who’s quick with a deflection joke and terrible at getting personal. And she, just like her four best guy friends and fellow professors, is perma-single.


So when a routine university function turns into a black tie gala, Mille and her circle make a pact that they’ll join an online dating service to find plus-ones for the event. There’s only one hitch: after making the pact, Millie and one of the guys, Reid Campbell, secretly spend the sexiest half-night of their lives together, but mutually decide the friendship would be better off strictly platonic.

But online dating isn’t for the faint of heart. While the guys are inundated with quality matches and potential dates, Millie’s first profile attempt garners nothing but dick pics and creepers. Enter “Catherine”—Millie’s fictional profile persona, in whose make-believe shoes she can be more vulnerable than she’s ever been in person. Soon “Catherine” and Reid strike up a digital pen-pal-ship...but Millie can’t resist temptation in real life, either. Soon, Millie will have to face her worst fear—intimacy—or risk losing her best friend, forever.


The book had some awesome moments. The friendship between Millie, Reid, Ed, Alex, and Christopher was really well written and I am sure many of us reading it were even a little jealous of such a close group of friends. Their banter, games, and acceptance of each others strengths and faults had me both laughing and swimming in a sea of envy 💛
Once all secrets are out in the end of the book the story becomes rather emotional there for a while too, and that was nice.


There were so many instances during the book where I seriously consider not finishing it though...and that is never a good thing.
Millie drove me insane. Catfishing your best friend? and for that long? In what planet is that ok? I understood why she did it but it made the whole 'romance' feel off the whole time. Maybe if they weren't sleeping together as well it would have been better. As it was it all felt like a poor planed game. And it doesn't help I didn't like her personality either. She was dishonest to everyone, including herself.

Reid was pathetic and awesome all at once. I liked his character, he was fun, intuitive, a good friend... but he was also pathetic for not seeing what is right in front of him. And why oh why did C Lauren wrote an intimate scene between Reid and Millie followed by a message to 'another' woman?!?!? His character is portrayed the whole time as trustworthy and noble and than that? It made no sense and it got me rather ticked off.

All in all I liked the friendships, I liked the other boys, for the most part I loved Reid... I never liked Millie though and the 'romance' (if we can even call it that) was messed up. Where they truly in love? The book ended and I still don't know...