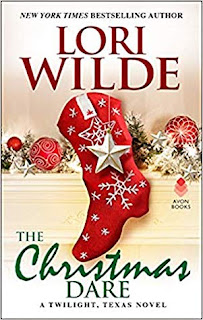 
Blurb:
Kelsey James always played by the rules and look where it got her—dumped and half-drunk in a poofy white dress, her Christmas wedding ruined. Then her best friend talks her into going on her “honeymoon” anyway, daring her to a “Christmas of Yes.” It’s about time she lets loose a little, so Kelsey agrees to say “yes” to fun, to romance, and to adventure! And adventure leads her right smack into the arms of sexy Noah MacGregor.

Noah’s never one to say no to a risk—from leading his NBA team to victory to making Christmas cookies in Twilight, he’s up to the challenge! But a lot has gone on since they were teenagers, and he knows he has to take his time to make Kelsey dare to believe that what they feel is more than just the holiday magic that’s in the air . . .

The Christmas Dare had a little bit more angst than most holiday themed romance books, and therefore, I liked it a little more than most. It has some 'meat' to it -for luck of a better expression right now...

Noah is a easy go happy kind of guy. Always in a good mood, always with a smile on his face, always ready to help. He doesn't let things bring him down, for better or worse, he just moves on to better things. One of those things was his relationship with Kelsey. They were young though, so one can forgive them both for that mishap. I liked his character, liked his love for everything Christmas, his love for his family and his small town. Everything about him screamed fun and comfort.
Kelsey was a different story all together. She had great moments but for the most part her character was unbearable. She was always winning, felling sorry for herself, and yet not willing to do anything about it. The author tried to make her come across as someone naive, but her naivete at that age was just unralatable and not at all believable. Specially when it is obvious her friends, Noah, her father, and everyone else around her can both see what she is not seeing and has tried to tell her as much a million times. She just ended up coming across stupid and childish.

The secondary characters were amazing!!! It is no wonder this series is going on book 10 (though you can read this easily as a stand alone). Every single one of those side characters deserves his/her own story -the ones that don't have one yet anyway-.

All in all, I really liked this Christmas novel, which is not something I say often about Christmas novels... I just wish Kelsey hadn't annoyed me as much as she did.