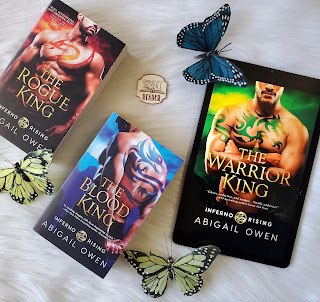 I absolutely adore this series. Any time anyone asks for a paranormal/dragon shifter recommendation this series comes to mind.

Books in the Series so far and reviews:

Blurb for The Warrior King:

Meira Amon is the most reserved of the phoenixes, finding computers easier to deal with than people and their messy emotions. But she wants revenge against the Rotting King Pytheios for the murder of her parents just as much as her sisters. Offering herself as a queen for their ally, dragon shifter King Gorgon of the Black Clan, only makes sense.Just one problem…Samael Veles worked his lowborn ass off to become the fiercest warrior of the Black Clan. He has pledged his life to protect his king at all costs. Yet somehow, in the middle of war, he took one look at a woman in a reflection and gave up his heart. When that woman turns out to be the phoenix promised to mate his king and help bring peace to their kind, he has no choice but to accept it.Until her fire unexpectedly destroys the king after they’ve wed. Now Samael must choose between his loyalty to his clan and protecting the queen who might be his mate from his people’s wrath, one of which will unlock a destiny no one could have ever imagined…

Every single thing about the first two books in this series was, in my humble opinion, perfectly done, and both endings had a mild cliffhanger that left you wanting for more. The chemistry was on point and the overarching story never took over the main romance. The plot holes made sense, you knew there were going to get resolved in the next books. I say all this because I want you to truly get a grip at how phenomenal I think the first two books were, and why I am a little sad writing this review. I really enjoyed the book and I will still recommend you read it, but it wasn't the 5 stars the other two books were.

Samael Veles is perfect! I mean, the male can do no wrong in my eyes. He is strong in body and mind, confident, honest, protective, honorable, kind... the list goes on and on. He pledges his life to his king and is loyal to a fault. He promises his king that if something happens to him he will watch over Meira and keep her safe. He doesn't like the idea, ever since he saw her in the mirror (previous book) he hasn't been able to stop thinking about her and he knows what that could possibly mean, but he keeps his promise and to the best of his abilities, he also keeps his distance.

Meira was... not perfect?! She is sweet, loyal, honest... but she is also inconsistent. She goes from "I don't believe in mates" to "mates forever" in 4 seconds flat. I won't say more not to spoil it, but it was kind of odd. And because of that, their chemistry suffered a little. I would say that out of the three books this was the less intense between the main couple.

As a whole, the book was very emotional. I felt bad for Samael and I felt bad for Meira. Their story was touching. It just wasn't the most passionate, which I suppose to many readers it will be a good thing. Each to their own right?

The other negative for me was that it was a tad slow. Again, a matter of taste. Slow burn is not my thing. Halfway through the book I want more than 1 or 2 kisses.

I loved seeing all our previous characters into play again. These sisters and their mates are a hoot! What happens to Maul and who/what he actually is was speculated in previous books and it finally comes to light. It was the single most touching and beautiful moment in the book. You will love it :)

The war goes on. More madness from Pheitos (I don't remember if that is how you spell the bas***** name), his witch, and those who follow him. A few plot holes that I assume will be dealt with in future books and at least 2 that should have been dealt with in this book. I was not a happy camper: "someone" dies without an issue being dealt with... Oh well...

Overall, great book! I recommend you read the series in order and I will most certainly be reading the next book. Just you know, isn't my favorite in the series. But it might be yours...

Find the book at: GoodReads