Abigail Owen has definitely became one of my favorite paranormal writers. I am yet to read a story by 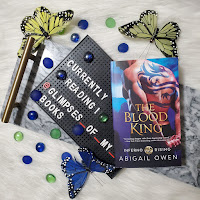 her I do not love. The Blood King was absolutely amazing. What is hard is to decide if I like this one or the first book, The Rogue King, better. On that note, I would not recommend reading this one without having read the first book. It is doable, there is a nice little intro to refresh your memory and such, so you won't be lost. But you will likely feel like you are missing an important part of the story.

Ruthless dragon king Ladon Ormarr must keep his throne at all costs. And now, with war on the horizon, he’ll need a miracle. Luckily, the fates have dropped Skylar Amon right into his lap.

Except he may have met his match.

The feisty Amon sister has no fear — of him or any other dragon shifter — is brash, doesn’t stick to protocols, and regularly offends his warriors and advisers.

Skylar also has no intention of sticking around. She doesn't believe in the whole destined mates thing and believes all dragon kings to be dangerous. But if it means taking out the High King who murdered her parents, she'll put up with Ladon... temporarily.

But the fates have other plans. And when Skylar disappears in the middle of a battle, Ladon will burn down the world to find her.

I really liked Landon in the first book. So it was not surprising to me that I loved him here too. He is strong minded, opinionated, ruthless when needed, kind, passionate, stubborn... and Skylar is those exact same things. Opposites may attract, but sometimes, two people that are on the exact same wave length complement each other perfectly too. These two are a force to be reckoned with.

Their chemistry was undeniable from the moment they met.

The side plot continued nicely. Added tension without taking over the book. There was plenty of action and romance.Plenty of humor and earnest moments.

The ending was as annoying and amazing as in the first book. Not quite a cliffhanger but it definitely leaves you wanting for more. How along do I have to wait?! I neeeeeeeeeeed the next book!!

Find the book at: