Calling on Quinn (The Blackhart Brothers #1) by Blue Saffire, 4 Stars

September 23, 2020
This was my first by Blue Saffire and certainly won't be the last. I very much enjoyed the romance and the camaraderie between brothers that she created here. I almost liked that even more than the romance. The relationship between the brothers and their distinctive personalities left me wanting for more. They were fun, full of heart and loyalty, charming. 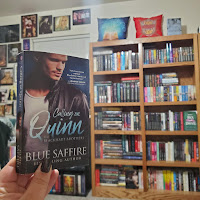 Quinn is a private investigator with his family. He and his brothers all work together and due to the nature of their work danger does tend to follow them. He is a former cop and an alpha in every sense of the word. He may melt for his nieces and nephews but he also has a really bad temper when someone messes with those he loves. His attraction to Alicia was instant and it quickly turned into more. When someone hurts his sister he does everything he can to figure out who is behind and and to protect his family and the woman he is falling for. I REALLY liked him. Which is not surprising if you have been following my reviews for a while. I do like my alpha males.
Alicia had a terrible year. Betrayed by her best friend and with an idiot as an ex she is not sure how to move on. Thankfully she has two roommates and good friends giving her a push in the right direction. And of-course one very persistent man. Quinn does not give up on what - or who he wants. Ever.
I liked her. But I confess that she is a tad forgettable. The book really is about the brothers.
That and the Irish accent are what stops me from giving this beauty a 5 star. I am British, and I get very picky and annoyed at accents from my side of the pond that are either not done correctly or feel a tad forced (I say it this way because I know most of my readers are in the US). It wasn't bad, it just felt a little forced. I didn't add anything to the story.
A lot of readers love accents. A lot of readers don't. So I would say take that in consideration.
Apart from that, do give the book a go. I really enjoyed it and will definitely read the next book in the series.
Find the book at: GoodReads - Inklings Bookshop