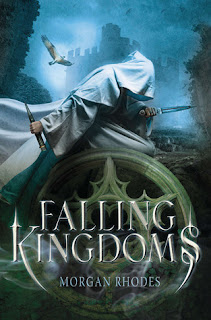 On January 15th I will be taking part of a blog tour with Penguin Random House for Gathering Darkness, book 3 in the Falling Kingdom series by Morgan Rhodes. Since this blog went live after I have read books 1-4 in the series I decided to give you guys a short review on each of the other books before and after the tour. The review on book 5, Crystal Storm, went up when the book was released. Review here: Crystal Storm


So... we begin with Falling Kingdoms!

"Magic will find those with pure hearts, even when all seems lost. And love is the greatest magic of all."

Although I love all the books in the series the first book is the only one not to receive 5 stars from me. I have found through time that many people give up on the series because of the first book. That saddens me but I can see why... It can be hard to keep track of everything in the first book, the three kingdoms and the different characters from those kingdoms all have their separate stories and at first they don't appear to relate to each other. It is on the second book in the series that everything truly collides and the story I have come to love becomes my favorite series of all time.

That being said, I am one of the few readers out there that can say in full honesty to have been in love with bad boy Magnus from his very first appearance on the page. Falling Kingdoms may not have been the best book in the series, but I did love it!

So here is the blurb, the basic outline of the book:
In the three kingdoms of Mytica, magic has long been forgotten. And while hard-won peace has reigned for centuries, a deadly unrest now simmers below the surface.As the rulers of each kingdom grapple for power, the lives of their subjects are brutally transformed... and four key players, royals and rebels alike, find their fates forever intertwined. Cleo, Jonas, Lucia, and Magnus are caught in a dizzying world of treacherous betrayals, shocking murders, secret alliances, and even unforeseen love.The only outcome that's certain is that kingdoms will fall. Who will emerge triumphant when all they know has collapsed?

It's the eve of war.... Choose your side.Princess: Raised in pampered luxury, Cleo must now embark on a rough and treacherous journey into enemy territory in search of magic long thought extinct.Rebel: Jonas, enraged at injustice, lashes out against the forces of oppression that have kept his country cruelly impoverished. To his shock, he finds himself the leader of a people's revolution centuries in the making.Sorceress: Lucia, adopted at birth into the royal family, discovers the truth about her past—and the supernatural legacy she is destined to wield.Heir: Bred for aggression and trained to conquer, firstborn son Magnus begins to realize that the heart can be more lethal than the sword....

The blurb really tells you all you need to know before getting into the first book. I urge you to be patient if you like many find the first book a little difficult. I promise you that it is worth it!
Cleo is a spitfire of a girl who you will learn to love, Jonas is an angry soul with a heart of gold, Lucia is a complicated spoiled girl who will learn many lessons as the story progresses, and Magnus is our bad boy with plenty to atone for, plenty to learn, and although he doesn't believe it himself, a good man at heart.