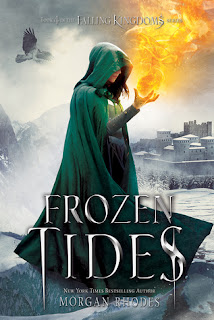 “If every mortal looked at others as their friends, not as their enemies, the world would be a much better place, wouldn’t it?”

A lot happens here again. It is not as fast paced as Gathering Darkness was but it is still a masterpiece. But than you should take that comment with a grain of salt because Gathering Darkness will always have a special place in my heart. It is there that Magnus finally faces his many conflicting emotions and I just adore the man 😃

Literally everyone is fighting for something in Frozen Tides and in desperate search for the kindred. Everyone wants its power for themeslves. Our characters journeys, Cleo, Jonas, Magnus and Lucia is full of bloodshed, hurt, misplaced trust, and love.

So... Magnus and Cleo are off in the north castle where Magnus gets to be in-charged. Not that Cleo lets that change her attitude towards him in any way shape or form! The more time they spend together the more aggravating it becomes to sit and read their interactions. The angst and the built up tension between the two is palpable!

Cleo has grown soooo much. She is brave, fierce, smart. She is true to herself and never lets anything or anyone bring her down. She fights Gaius, she fights Magnus, she fights Amara... she will fight anyone that tries to reduce her to nothing.  And it is adorable how she is stands up for Magnus, how much she has come to believe in him besides his cruelness.

Magnus is still learning to be himself. To be a man apart from the comparisons everyone makes between him and his father. His personality will never change, he will always be a moody one, but he is learning that there is more to him and to those around him than he thought at first. He is also learning to trust his heart, not an easy task considering the plague of a girl who has hold of it 😉

Jonas is still alive. No, I don't know how. Every plot of his makes me laugh. He is easier to love here, some of his anger is gone, his character is finally developing into a mature person and come Crystal Storm he will really come into his own.

Lucia has gone 'bananas'. She is putting her trust in Kyan and lets just say he is not a guy one should trust with anything. Ever!

The 'evil' characters Moran Rhodes creates are all amazing for one very simple reason: although this is a fantasy book, they are all very human and very real. You will fell sympathy not only for Magnus, but also for Amara. And comes Crystal Storm, even Gaius.

"He glared down at the angry princess. She stared back up at him, without intimidation. Her shoulders back, her chin up, she was a burning torch in the middle of the cold, endless night. How he wished he was strong enough to hate her."


He loved her more than anything else in this world.”

YOU WILL FIND THE REVIEW FOR THE 5TH BOOK, CRYSTAL STORM, HERE