This was so SWEET. I was not expecting that on a book on immature and self-absorbed Eric! 🤣
And so this was slightly different than I was expecting...in a good way of-course.

I am very much in love with Kylie Scott's writing (as you all know by now). I love the sassy characters, the funny stories, the romance, the beautiful friendships...
Chaser was different in the sense that the humour was not as present as in the other books; and although all our beloved characters (including the Stage Dive members) make an appearance, it is mostly focused on Eric, there was a little less of the other bar members than usual (or that is how I felt anyway). That was not a bad thing at all though,  I have zero complaints. It was another masterpiece by Kylie Scott!

Here is the blurb for you guys: 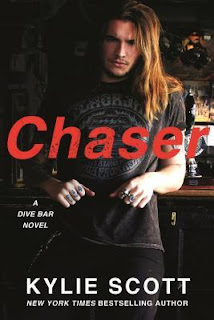 Given his well-earned bad boy reputation, Eric is having a tough time scoring. When single Jean moves to town, she seems heaven sent by the sex gods. Only problem is, she not only wants nothing to do with him, but it turns out that she's pregnant.

Starting over in a small town, Jean is determined to turn her wild lifestyle around and be the kind of mother she always wished she'd had. Since local bar owner and all round hottie, Eric Collins, is now determined to steer clear of her pregnant self, it should be easy. When she goes into labour during a snow storm and her car slides on some ice, it's Eric who comes to the rescue.

There seems to be a bond between them now, but is it enough? And can Eric give up his manwhore ways to be the man Jean needs?

Jean was an easy to like main character, though I felt Eric had a stronger page presence than she did. We didn't get to know much of her, enough to like her, not enough to love her.
Eric on the other hand...
Boy that man went through some amazing character growth through the story. It was impressive and really well written. At the beginning his friends are giving him a hard time for being unreliable and irresponsible, and the way he goes about trying to prove them wrong is both funny and face-palm worthy. I had to laugh.
His growth didn't happen overnight, it happened slowly and without him even noticing it was happening. He transformed from bad boy manwhore to the most caring and loving guy in the whole series. He starts putting Jean and the baby ahead of his own feelings without even having to think about it, naturally and willingly. IT WAS BEAUTIFUL!


ABOUT THE AUTHOR:
Kylie is a New York Times and USA Today best-selling author. She was voted Australian Romance Writer of the year, 2013 & 2014, by the Australian Romance Writer’s Association and her books have been translated into eleven different languages. She is a long time fan of romance, rock music,
and B-grade horror films. Based in Queensland, Australia with her two children and husband, she reads, writes and never dithers around on the internet.
Links: Facebook  Fan Group Twitter Instagram