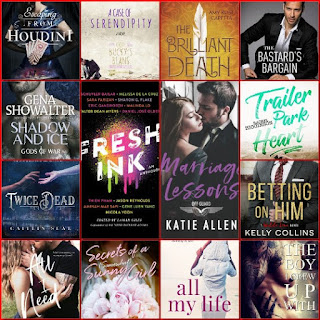 I had the pleasure of joining Kim's 2018 ARCtober Reading Challenge this year. There were a few older ARCs I wanted to get through. In the picture are all the ARCs I did get through, an in addiction to that there were two books that I DFN after 50 or so pages- Kill the Farm Boy by Delilah Dawson humour/retelling) and Annex by Rich Larson (YA sci-fi). These two ARCs I got at BookCon this past June and they have been sitting on my shelf since. Sadly I really did not like them. 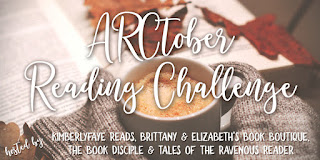 I try my best to read my ARCs as I get them so I didn't have many lying around, but it was fun to get through the few that I did and of-course the new ones that were released in October. I will certainly be joining Kim again Next year if I happen to have ARCs around again.
I also read an insane amount of romance this month, of the 16 ARCs I had set aside for ARCtober only 6 were YA. And sadly, only 1 I actually liked: Twice Dead. I still prefer Young Adult fantasy to any Contemporary Romance (not PNR, that still my first love!), but I had a lot of disappointing ones lately... Not to fret though, Kingdom of Ashes in on my TBR for November and I know that will set things right!

Anyway, bellow is a list of all the ARCs with the link to their respective reviews (or a short review for the ones that didn't make the cut):

A Case of Serendipity by K.J. Farnham (Contemporary Romance)

The Bastard's Bargain (The O'Malleys #6) by Katee Robert (Mafia Romance)

Shadow and Ice (Gods of War #1) by Gena Showalter (PNR)

Fresh Ink: An Anthology, by Nicola Yoon and others (Young Adult Contemporary)

The Brilliant Death by Amy Rose Capetta (Young Adult Fantasy):
I really wanted to like this one, it had a promising plot and you guys know me: fantasy and paranormal are my reasons for existing! :)
But, it did not deliver. First of all there were far too many plot holes. Teo's magic is dull and it at times makes no sense. She changes something into something else in the very first pages (sorry, trying not to spoil it) but later in the book she can't do it... humm.... why?
And than there is the matter of gender fluidity... it was not done all that well and although I am all for diversity in books it annoys me to no end when that is the main focus and not the story. If the story is not written well the characters won't be relatable and than what is the point of a diverse character? Cielo in the end was this mysterious magical being with unclear morals that you never really understood or got to know. And because of that the so called romance was really off too.
All in all not enough character or world building. And for me at least it is impossible to relate or enjoy a book that does not have a balance between all those things.

Escaping From Houdini by Kerri Maniscalco (Young Adult Crime Fiction):
I got this ARC at BookCon in June but I had not read any of the previous books. I actually still haven't read this book. I read Stalking Jack the Reaper with the intention of getting to this one but in the end decided not to. I didn't dislike Stalking Jack the Ripper (I gave a solid 3 starts), but I haven't been into crime fiction since my teen years, it was just an 'ok' book for me so I don't know when or if I will ever get to the other two.

All I Need by Jennifer Van Wyk (Contemporary Romance)

All My Life by Prescott Lane (Contemporary Romance)

The Boy I Grew Up With by Tijan (New Adult):
Another book I really wanted to like but didn't. Tijan is one of my favorite romance writers and it hurts badly to  have to admit (for the first time) that I did not like a book by her. It feels like I am committing a crime... To be honest I don't even know what to say here... It was just a childish story. They break-up, come back together. Break-up, come back together... you know the end from page one. Nothing surprises you. And the main characters instead of being relatable are annoying and made my eyes roll... The highlight of the book are the few times the characters from her previous book Crew give an appearance.