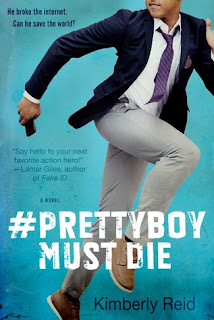 This book hurts my intellect!
I almost didn't finish reading it, it took a lot of mental pep-talk.
The blurb for this book is great, I was very much looking forward to it, it sounded fun... it disappointed in every possible way. Here is the blurb for you all:

A CIA prodigy's cover is blown when he accidentally becomes an internet sensation in #Prettyboy Must Die, inspired by the #Alexfromtarget story.


When Peter Smith's classmate snaps a picture of him during a late night run at the track, Peter thinks he might be in trouble. When she posts that photo--along with the caption, "See the Pretty Boy Run,"--Peter knows he's in trouble. But when hostiles drop through the ceiling of his 6th period Chem Class, Peter's pretty sure his trouble just became a national emergency.

Because he's not really Peter Smith. He's Jake Morrow, former foster-kid turned CIA operative. After a massive screw-up on his first mission, he's on a pity assignment, a dozen hit lists and now, social media, apparently. As #Prettyboy, of all freaking things.

His cover's blown, his school's under siege, and if he screws up now, #Prettyboy will become #Deadboy faster than you can say, 'fifteen minutes of fame.' Trapped in a high school with rabid killers and rabid fans, he'll need all his training and then some to save his job, his school and, oh yeah, his life.

So... first of all, the story isn't fun. It was insubstantial, flimsy, and lacked any sort of depth. It is borderline ridiculous because of how unrealistic it is too. Now, both those things would have been okay if the book had succeeded at being funny, whimsical books are not known for being realistic or in depth. It would also have been okay had it succeeded at being a good spy book, those also aren't known for being realistic. But it failed on both counts. It was ridiculous instead of funny and witless/foolish instead of a clever spy book.

That being said it is possible that such a mindless story will strike a cord with middle graders. As a librarian though, I wouldn't want my kiddos to read something so unimaginative.

And now we go to an issue I know many will have with the book too: the book was oozing with condescending, patronizing and sexist remarks. As in, a pretty girl cannot be a spy because...well... she is nice and pretty. And one I had to laugh not to cry in anger, a girl with long nails cannot be a hacker! Seriously? The main character was full of those stupid foregone conclusions and a lot of them were just rude.
I don't usually have problems with things like that in books, I am more forgiving towards books that lack political correctness than most reviewers out there, and still, even I found this very very wrong. That in my books says a lot.

The 1.5 star is for the blurb and the idea behind the book. From that blurb a great teen spy book could have been written. It is also for the character Bunker, Jake's friend at school and the only character that did not suck!