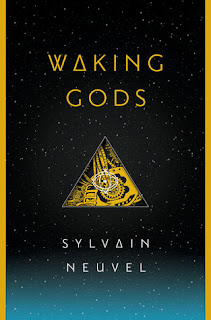 My feelings towards this book are very similar to Sleeping Giants, it was an entertaining sci-fi with a fast pace story, good plot, good characters, and just enough mystery and action. Once again, the audio-book for this was phenomenal. The many voices used for all different characters worked really well! I have the kindle arc for the last book (coming out this May) and I will miss the audio format.

So... the story picks up 9 years after Sleeping Giants, and it does so masterfully. I would argue (even though I am giving both books 4 stars) that Waking Gods is a little better. We already know the characters, some of the background...we go right into the middle of things, there is a palpable tension (yes, that is possible on books 🤣) from the very first pages.

There were more sci-fi elements in Waking Gods, which should please all sci-fi lovers out there. And the stakes are higher, a lot higher. It is no longer a matter of how much damage the robot humans found can make, but its about humanity's survival. At first one robot appears out of nowhere in London, then another one, and another one, and another.... all in some of the most populated cities in the world, and they are not here to make friends.

Our beloved characters are still more or less the same.
Kara still the same free-spirited, strong headed woman she has always been; Vincent will still make you laugh and melt your heart all in one breath; Our mysterious interviewer shares more of who he is and his true feelings towards it all while maintaining his somewhat detached persona; and Dr Rose...well...she is the one that changes most. What happened to her made her darker. Not evil dark, just more pessimist.
There are a few new characters, mostly very secondary and although important also a tad forgetful. Waking Gods than had the same issue Sleeping Giants did, the characters are hard to connect and didn't feel fully developed. Vincent and Kara added much heart to the story but that is going to be because we already have a whole book with them on it. And since not everyone survives one would hope all characters had been developed better.

And that brings me to plot twists.... I won't spoil to you all, but there are two deaths that I personally didn't see coming. I was in shock when they happened. There are a few more unexpected plot twists and I found them very clever.

If you like sci-fi, do give this a try!